Bhasikiti threatens to pull out of Mwenezi by-election 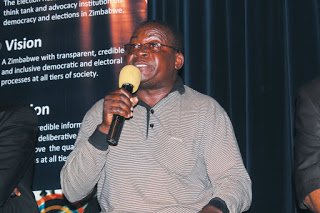 21 March 2017, MWENEZI – Zimbabwe People First (ZimPF) candidate for the pending Mwenezi East by-election Kudakwashe Bhasikiti-Chuma has threatened to pull out of the race citing gross intimidation of his supporters as well as vote-buying by the ruling party, Zanu PF.
Bhasikiti confirmed the development and insisted that he will withdraw from the race if the Zimbabwe Election Commission (ZEC) fails to act on the matter as soon as possible.
“We cannot continue to be used by ZEC to rubber-stamp fraudulent elections.  My supporters are being intimidated every day; they are being followed to their houses and threatened at night. We raised these issues with ZEC but nothing has been done so should we continue when my people are being harassed and intimidated?” said Bhasikiti.
Though Bhasikiti said he wanted to first consult with his ZimPF party leadership on the way forward, sources from his campaigning team confirmed that they have unanimously agreed to withdraw from the race.
“I am at my home as we are speaking right now; we agreed to pullout because our supporters are being harassed and intimidated. Bhasikiti will make an official statement tomorrow (Wednesday 22 March) but we have since stopped campaigning,” said the source.
Bhasikiti also accused the Zanu PF candidate Joosbi Omar of vote-buying and insisted that there was no point of participating in the elections if ZEC does not suspend him.
They are distributing government food aid and inputs in the name of Zanu PF. The Zanu PF candidate is engaging in vote buying and he must be disqualified. If ZEC fails to disqualify him then there is no reason for us to continue in these elections. We cannot continue to be used by ZEC to rub-stamp their fraudulent elections,” Bhasikiti said.
Addressing bishops and indigenous churches at Rutenga Primary School over the weekend, Omar, however, described Bhasikiti as a mad man and pleaded with men of the cloth to pray for the ZimPF candidate so the he may get back to his senses.
“Bhasikiti does not think properly and he needs prayers. I am using my resources to develop this area; we are repairing a bridge as well as grading dusty roads in the constituency. Bhasikiti has nothing to offer to the people except telling false stories,” said Omar.
ZimPF is however, expected to have a meeting tomorrow (Wednesday) to deliberate on the matter and Bhasikiti would give an official statement thereafter.
Efforts to get comment from ZEC provincial officer Zex Pudurai were fruitless as his mobile went unanswered by the time of going to print.politics,topnews
Share
Facebook
Twitter
Pinterest
WhatsApp
Previous articleIt’s too little too late, Biti
Next articleSarah Mahoka, Sandi Moyo in hot soup