Bikita cops in soup for stealing over 100 heard of cattle 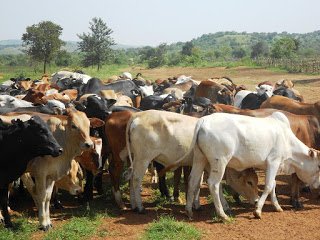 Itai Muzondo
Seven Bikita police officers are in trouble on allegations of involvement in a stock theft syndicate after they allegedly abetted the theft of over 100 heard of cattle on different occasions in an elaborate cattle clearing racket, TellZim News has learnt.
Although details were still sketchy by the time of going to print, the seven are understood to have already been marshaled to an internal hearing charged with unprofessional conduct concerning their alleged involvement in the cattle clearance ring.
The racket reportedly involved the officers giving cattle movement clearing certificates to livestock rustlers who would then use the clearances to traffic stolen cattle to abattoirs.
Masvingo Province acting police spokesperson, Assistant Inspector Kudakwashe Dhewa however, professed ignorance over the matter saying the Masvingo East district where the incident happened should first confirm the matter.
“I am not currently in a position to comment until I receive information from Bikita as I have tasked the responsible person there to give me details,” Dhewa said.
The development comes at a time Zimbabwe has realised a 32 percent decrease in stock theft cases as compared to cases that had been recorded over the same period last year.
Masvingo and Midlands Province have the largest number of stock thefts reported this year.news

He who said it can not be done must not disturb the one doing it!
Share
Facebook
Twitter
Pinterest
WhatsApp
Previous articleBuhera RDC rids Murambinda of vendors
Next articleMEMC, PAMUST bills to enhance revenue collection in mining sector