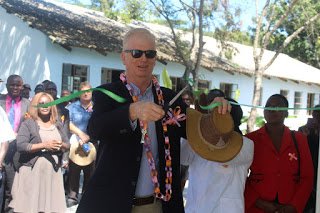 BIKITA – In support of government’s STEM initiative, Bikita Minerals last week stretched their generous hands and honoured their promise to refurbish and equip the Bikita Fashu High School science laboratory.
The latest gesture of goodwill adds to the previous textbook donation made by the mining company to the school last year.
The Bikita Fashu High School science laboratory now boasts state-of-the-art equipment purchased to the tune of thousands of US dollars.
Safety goggles, safety shoes, electronic microscopes, funnels, flasks, beakers, acid resist gloves, hot plates, a fridge, experiment acids and a digital lab scale forms part of the equipment in the lab.
Speaking at the handover ceremony, Bikita Minerals Chief Executive Officer Grant Hudson said the donation is part of the company’s efforts to improve learning conditions in Bikita.
“Our focus is to make Bikita the driving force in education. We will do all we can to help schools in this district. I have also made it a personal commitment that I should give these pupils all equipment needed so that they can do better in science than I did,” Hudson said.
The lab, which Bikita Minerals built back in the 1990s, now serves as a symbol of the company’s commitment to the advancement of science education in the district.
Bikita District Schools Inspector (DSI) Zakaria Makopa said the donation has helped bridge the technology gaps in Bikita’s drive to fully embrace STEM.
“Thank you for this great job. Through this development, science has been made easier. As a ministry, we are delighted by this special gift because most of our schools lack such facilities. We also do not forget the school feeding scheme which is benefitting primary schools in Bikita,” Makopa said.
Bikita Fashu school head Hapias Madzivo said he believed the school was destined for something greater especially if Hudson remains with the company.
“When I first met Hudson, we informally discussed the challenges at the school not knowing it will lead to a lot coming our way. Besides this building and equipment, we received many textbooks from Bikita Minerals.
“We can now boast of being the only school in the province with such state-of-the-art equipment, thanks to that relationship,” Madzivo said.
Chief Chiwara, born Reuben Mupasi, who came as a parent, said local traditional leaders should thank the ancestors for having a caring company in their land.
“We have a lot to be proud of because of this mine. Our land is really blessed with a company which takes cares of our needs. It is not a secret that most mining companies are only exploit resources and give back nothing to the communities but Bikita Minerals has proved to be a different case altogether,” Chief Chiwara said.education