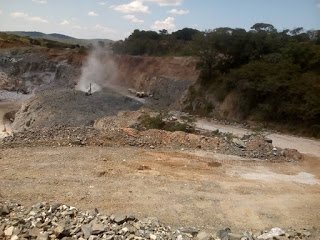 Moses Ziyambi
BIKITA – Bikita Minerals is implementing backfilling as one of the several measures adopted to ensure that mining operations do not leave behind a trail of environmental degradation, TellZim News has learnt.

Among a host of other measures that include recycling waste water, backfilling has seen the lithium miner striking a remarkably fine balance between commercial exploitation of natural resources and the need for environmental conservation.
The mining company recently opened up its operations to media scrutiny and a lot of tough questions were asked, with management explaining that the company was not driven merely by narrow commercial interests, but by the need to protect the environment too.
Of particular interest to journalists who toured the mining operations on Tuesday was backfilling which, as the name implies, can simply be defined as a process of using materials to plug the holes that would have been dug up during extraction of the mineral ore bodies.
Many mining companies around the country have fallen short of the most basic environmental conservation expectations and have been criticised for leaving behind deep gullies as well as polluted and heavily silted rivers.
During the tour, Bikita Minerals quarry manager Victor Simango took a group of journalists from almost all mainstream media houses in Zimbabwe to the company’s Al Hayat quarry.
The group was also shown the Bikita Quarry which produces much of the lithium-bearing petalite and lepidolite ore.
The pits – that are up to nine metres deep – are observable largely on a place that an uninitiated eye would never suspect itself used to be a deep pit which was expertly plugged back to solid ground using the backfilling method.
“We used the same soils dug out of the pits to do the backfilling. Ours is a quest for an environmentally-sustainable mining venture. We therefore take all the necessary measures to make sure we do business while maintaining the health of the environment,” said Simango.
The backfilled ground, ornamented by pieces of small-sized stones of all shades and luster, would make a collector’s paradise.
“We plan to plant trees and grass right here, so that there is little difference from the original state of the ground prior to the beginning of mining activities. This is part of our commitment, as Bikita Minerals, to a safer environment,” said Simango.
Elsewhere, the open pits of the mothballed Mashava asbestos mine claimed a victim recently; a Great Zimbabwe University (GZU) student who drowned in a disused quarry last year while many others have reportedly been maimed by wide-open pits.
Mashava is host to many open pits that pose a grave danger not only to human but animal life as very little, if any backfilling seems to have been done prior to the closure of mining operations over a decade ago.
As is to be expected in any place where serious mining is done, considerable quantities of water collect into pits and that, if not taken good care of, could be a hazard.
Bikita Minerals, however, is pumping such water from the quarries to the main dam several metres away. From there, the water is fetched for use in the Dense Medium Separation (DMS) process. Any other waste water generated at this stage is recycled again and again.
Earlier on during the tour, Bikita Minerals Chief Executive Officer (CEO), Grant Hudson had told the media team that the company was also on a reclamation exercise in the old dumps.
The company, which operates a 15 square-kilometre mining lease, is recovering ore which was thrown away to the dump by previous miners in the old days because technology of that time could not detect the relatively low value in them, let alone extract it.
“This is helping us to save on the costs of doing new exploration and digging work. It is easier and cheaper to mine the dump than to explore and dig for new ore bodies from the ground,” said Hudson.
The act of mining the dumps is itself widely regarded as a form of environmental conservation and recycling as it helps to reduce the need to break up further ground to extract new ore. Machinery doing reclamation work in the dumps also consumes less energy, which in turn helps to lower air pollution and other cumulative effects of mining on the environment.
Lithium was first discovered on what was then named the Bikita tin field back in the 1920s and the mining business was done by a ragtag of small scales miners until the early 1950s when all operations were consolidated into one company.
The current owners of Bikita Minerals bought the company in 2014, and have made considerable investments to improve production and to improve lives while taking care of concerns on the effect of mining operations on the environment.
Share
Facebook
Twitter
Pinterest
WhatsApp
Previous articleKazembe to grace gospel artist Ataliah Parehwa album launch
Next articleJCI seeks to recognise outstanding young persons