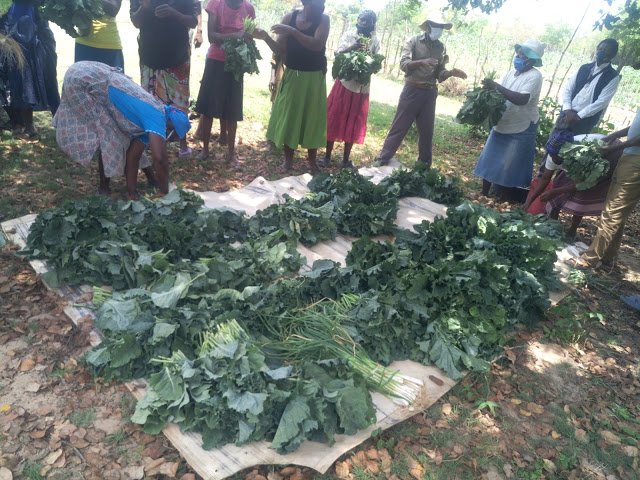 The Community Based Aid
Programme (CBAP)’s vegetable gardening initiative which saw 76 villagers in Mapanzure
receiving free seeds is now bearing fruit, with beneficiaries recently donating
some of their produce to Morgenster Hospital.

Several bundles of covo
and rape as well as king onions and tomatoes grown at Siyawareva cooperative
garden, Macharaga village in Ward 19 Masvingo Rural District under Chief
Mapanzure were ferried to the hospital to help feed patients.

Earlier this year, CBAP
donated vegetable seeds to villagers who have beds in the cooperative garden so
that they could produce more.

After a fruitful
gardening exercise, the beneficiaries decided to pay back the favour by
donating part of their produce to the hospital.

Speaking during the
handover of the donation to CBAP, Siyawareva cooperative garden chairperson,
Emson Masa said they were pleased to be able to donate to needier cases.

“We invited people from
CBAP so that they can take these vegetables to Morgester Hospital on our
behalf. It’s our way of contributing to the welfare of patients in a similar
manner that CBAP helped us with seeds and CARE helped us with fencing for the
garden,” said Masa.

The 1.25ha garden was
established with assistance from CARE International Zimbabwe which provided the
villagers with fencing.

Masa said they faced a
lot of challenges in their work at the garden but they will continue to work
harder for the good of the project.

“There are 76 of us and
everybody has 10 beds of vegetables in the garden. We also have orange and
naartjies tree that we care for but most of our members are now old and they
are finding it harder to water their plants using buckets. It would be easier
if we had a pump and piping,” said Masa.

In his remarks, Mhungu praised
the villagers for making the best of the assistance given to them.

“It’s very encouraging
to note that people who received assistance from us are also now giving back to
the community. This is an example of the good that we can achieve if we work
together as a team,” said Mhungu.