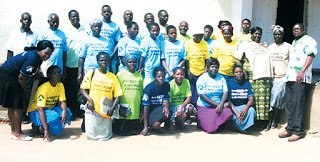 Siyabonga Sayi
The Community Based Aid Programme (CBAP), a Christian non-profit making organisation recently conducted a capacity building workshop in Muzokomba area in Buhera on Gender Based Violence (GBV) calling for an end to all forms of the vice.
The two-day workshop saw members of the Reformed Church in Zimbabwe (RCZ) and other community members being trained to be GBV advocates and counselors.
CBAP Field Officer Samuel Mafa encouraged trainees to work closely with people in their communities and other interested parties in the fight against GBV.
“We must take advantage of every gathering to further the anti-GBV agenda, let’s partner health workers and the police appropriately to end that social vice,” said Mafa.
One of the trainees who is a deacon at Muzokomba RCZ, Cosmas Chikonda, expressed confidence that the war against GBV and other social problems can be won if people are given knowledge.
“We need this kind of education in communities like ours where we have largely ignored the effects of GBV on community development and the well-being of families. I now realise the duty that we all have as ambassadors of the anti-GBV effort,” said Chikonda.
He urged church leaders to use their influence to tell men not to abuse their wives as that will go a long way in cultivating social cohesion.
CBAP Director Samuel Mhungu said his organisation aims to take the message to religious leaders and their congregants as they form an important part of opinion leaders.
So far, CBAP has conducted awareness campaigns and training workshops in various areas like Muchakata, Mapanzure and Zimuto, and aims to take the campaign to more communities across the country.news