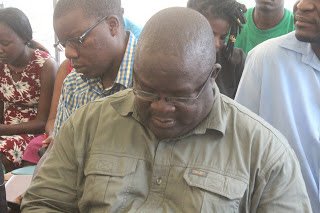 Residents of Chiredzi Urban Ward
6 and 7 have petitioned the District Development Coordinator (DDC) over what
they see as unfair and biased distribution of World Food Program (WFP), TellZim
News has learnt.

This comes in the wake of
allegations that Zanu PF structures are manipulating the DDC’s office to
channel the assistance to wards with ruling party councillors.

In letter dated October 23 and
addressed to the Lovemore Chisema, petitioners allege that the distribution exercise
is being implemented in a politicised manner to exclude people from wards with
MDC Alliance councillors.

“Currently on the Plan International
and WFP urban assistance, Ward 6 and 7 are left out as if there is absence of
vulnerable families in these wards. This is a serious cause for concern as
vulnerable families believe that your office will intervene in the spirit of
equity and justice for all. For the vulnerable in Ward 6 and 7, our average
income is US$0.35 per day.

“It becomes a worry among us the
vulnerable families in Ward 6 and 7 when aid agencies continue excluding us
from these programs without a concrete reason from your office and team. The
general feeling in Ward 6 and 7 is that we are being persecuted for political
reasons as our councillors are from the opposition party,” reads part of the
letter.

When contacted for Chisema
dismissed the allegations saying the exercise was being implemented in a
transparent and systematic manner.

Chisema said wards 3, 4, 5 and 8 had
already benefitted while wards 1, 2, 6 and 7 were set to benefit depending on
the vulnerability rankings.

Zanu PF Masvingo provincial
spokesperson, Ronald Ndava also rubbished the allegations saying his party did
not have influence over the determination of beneficiaries.

“Our party is not involved in
distribution of food aid but there are government arms which work directly with
WFP in that programme. I don’t know why people drag Zanu PF into these kinds of
issues. We don’t fit anywhere there. There are people who just speak recklessly
to the media,” said Ndava.

WFP Zimbabwe country director and
representative, Francesca Erdelmann told TellZim News her organisation was
committed to the reduction of hunger in needy communities regardless of
political affiliation.

“WFP is committed to ensure that
food insecure and vulnerable households receive food assistance, independently
of political affiliation. This participatory process identified wards 3, 4, 5
and 8 as the most in need. WFP continues to monitor the food security situation
and if more resources become available, WFP will scale up its assistance
prioritizing the most vulnerable households,” said Erdelmann.

The Urban Social Assistance is
meant to benefit 10 000 vulnerable people from 2 000 households in Chiredzi.

The program is being run as a collaboration
between WFP and Plan International.