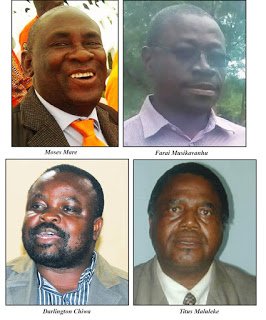 Chiredzi West constituency is one of the hot seats in Masvingo province and no candidate can win it without putting a good fight. At least five candidates have so far emerged and are ready to wrestle power from the incumbent Zanu PF legislator for Chiredzi West, Darlington Chiwa, come 2018 general elections.
Chiwa will first battle it out with former Tongaat Hulett agriculture director Farai Musikavanhu, Norman Sharara and former governor Titus Maluleke in the party primaries.  Having lost to Chiwa during 2013 Zanu PF primary elections, Maluleke is planning a massive come back, and it seems, he is already busy working on the mistakes that led to his loss during the 2013 primaries.
Maluleke and Chiwa, however, have a mammoth task as they also face stiff competition from Musikavanhu who is already reported to be splashing money like no one else in Chiredzi West. Musikavanhu has already done quite a number of projects among them construction of classroom blocks at two schools in the constituency.
Sharara, who is an education inspector, is also a dark horse and might spring a surprise though his chances are slim especially considering the campaigning pace that has been set by other candidates and the resources they have.
The ultimate winner will then battle it out with other candidates from Movement for Democratic Change led by Morgan Tsvangirai (MDC-T), Zimbabwe People First (ZimPF), National People’s Party (NPP) and National Constitutional Assembly (NCA).
MDC-T Masvingo provincial spokesperson Dust Zivhave is likely going to represent his party uncontested as no other candidate has emerged so far. Former Chiredzi West legislator Moses Mare, who has since become a political nomad, is also eyeing a comeback under the ZimPF ticket.
Mare left MDC-T to join the Tendai Biti-led People’s Democratic Party (PDP) in 2013 before leaving for ZimPF.
Political experience
Maluleke is the most experienced candidate of them all having been actively involved in politics since independence. Maluleke was the Member of Parliament (MP) for Zaka East in the 1990s before he was appointed governor of Masvingo province in 2009, the office he left in 2013.
Chiwa is also quite experienced as he be became actively involved in politics at the turn of the millennium and was elected Chiredzi West national assembly member on July 31, 2013. Chiwa will be seeking re-election at the 2018 general elections.
Musikavanhu is more of a political amateur; he has not been actively involved in politics until he resigned from Tongaat Hullet last year.  The former Tongaat executive is believed to have been given millions of dollars as his exit package and he is indeed spending a lot of money on various projects.  However, judging from the way he is splashing money so far, when Zanu PF has not even introduced the candidates selection criteria, it shows Musikavanhu is a greenhorn. Probably he should consider applying brakes until such a time when campaigns will be in full swing.
Sharara is probably a dark horse; the guy is not that really popular though. With Musikavanhu setting such a high pace and splashing resources, Sharara might remain unpopular with the people of Chiredzi West. He is still a government employee and that affects his activeness in politics.
MDC-T’s Zivhave has been with the strongest opposition party in the country since its inception. Zivhave has been in the MDC-T Masvingo provincial executive for over 10 years now and that speaks volumes about his experience in opposition politics.  Zivhave however, might be affected by lack of enough resources otherwise he has all what it takes to take a Zanu PF candidate head-on.
Mare is also experienced having been with MDC-T since inception before he joined other political parties like PDP and ZimPF. His biggest undoing is that he will be haunted by the vices he allegedly committed when he was MP for Chiredzi West between 2008 and 2013. There are issues around how Mare spent the Constituency Development Fund (CDF) as well as unfulfilled promises made during the run up to the 2008 elections.  Unless Mare has a solution to all this, his chances will be slim.
Level of Education
Many politicians are no so educated and the 2008 parliamentarians were probably the worst of all. Maluleke is a former teacher who left the profession to join active politics and became MP in the 1990s. At least he has a diploma in education. Despite being elected MP in the 1990s, Maluleke is still contesting to have another term in Parliament.
Chiwa is a former police officer who operated under the Criminal Investigation Department (CID). He therefore, at least has five O’ Levels including Maths and English subjects. Chiwa then left the profession to become an active politician and was elected MP on July 31, 2013. Chiwa is seeking second term in office.
Musikavanhu has a higher qualification in agriculture and that propelled him to become the agriculture director at Tongaat Huletts. If elected, Musikavanhu will be one of the few educated MPs from Masvingo province.
Sharara is a District Schools Inspector (DSI) (formerly District Education Officer) and at least he has a diploma in education. Many teachers often leave the profession to join active politics but not all of them have succeeded in the previous years. Maybe Sharara will succeed but it is really a mammoth task ahead for him.
Both Zivhave and Mare have at least a ZJC certificate each. Maybe, political experience will help them to articulate issues in Parliament if they are to be elected in 2018 general elections.
Very few of the current MPs contribute or move motions during parliamentary debates. It emerged that many of them are affected by the level of their education and they are intellectually inferior therefore cannot debate with the Professors and Doctors (PhDs) in parliament.politics, topnews