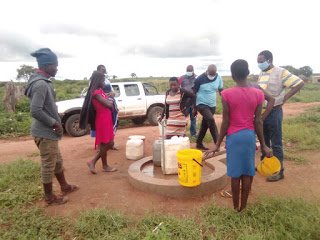 The
Mandipa piped water scheme, a Christian Care funded project, which was recently
implemented in the semi-arid resettlement area of Mwenezi West’s Ward 16
has  been praised as one of the
district’s most successful projects which ought to be a yardstick for future
projects within the district.

Commenced
in July 2020 and completed in December, the Mandipa project has 753
beneficiaries who are drawn from four local villages.

The piped
water scheme has made it easier for clean water to be accessed by villagers who
for long have been struggling to get the precious liquid for domestic use and
for their livestock.

The
solar powered piped water scheme draws water from Bubi River right to the
“door steps” of four villages which include Mandipa, Nyamandi,
Masunguri and Singari.

Addressing
stakeholders during the end of project review workshop that was organised by
Christian Care in conjunction with the Mwenezi Rural District Council (RDC) last
week, District Development Coordinator (DDC) Rosemary Chingwe praised the
Mandipa piped water scheme saying it was a much needed intervention.

Chingwe
paid tribute to the community for taking part in the project and ensure its
success and called on other development partners to take a leaf from the
Mandipa piped water scheme.

“We
thank Christian Care for spearheading such a wonderful project in Ward 16 of
Mwenezi West constituency.

“The
team spirit displayed by villagers was humbling and their level of commitment
to the project was overwhelming. Locals provided labour with excessive zeal
through, among several other duties, digging trenches.

“We
always encourage development partners to come with such interventions which are
community rooted,” said Chingwe.

Ward 16
councilor Shongedzai Shoko Told TellZim News that the Mandipa piped water
scheme came as a reprieve to villagers who had been struggling to get safe
water for domestic use.

“Water
has been scarce for villagers and domestic animals for too long. Villagers have
been relying on a drilled borehole which is situated deep in the forest and it
hardly produced enough water for villagers before it went dry.

“The coming
of this piped water project has lessened the burden on women who usually toiled
to secure clean water for their families,” said Shoko.

A
beneficiary of the scheme, Elina Sibanda, who hails from Nyamandi Village, was
on cloud nine as she chronicled the success story of the Mandipa piped water
scheme.

“Water
has been a perennial problem here. Several efforts to drill boreholes in our
area constantly hit a brick wall due to the low water table.

“To
access water for domestic use I used to travel six kilometers but now with the
establishment of the Mandipa piped water scheme, taped water is right at my
door step.

“We are
now able to provide water to our domestic animals with easy unlike in the past
where we would travel longer distances in search for water,” said Sibanda.

In many
parts of Mwenezi district’s resettlement areas like Wards 13 and 15, access to
clean water remains problematic leaving many to rely on
unprotected water sources for drinking and other domestic use.