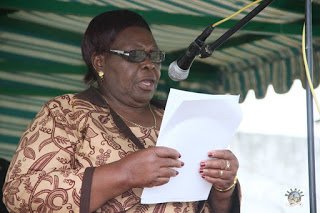 CHIREDZI- Minister of State for Provincial Affairs for Masvingo, Shuvai Mahofa surprised hundreds of members of the Zanu-PF women’s league who gathered in Chiredzi showgrounds recently when she suddenly announced that the First Lady Grace Mugabe will never replace her husband President Robert Mugabe.
Mahofa was speaking at a function to celebrate Aliginia Samson’s co-option into the Masvingo provincial women’s league executive.
Mahofa said that she has never heard of a First Lady who replaced her husband as president.

Shuvai Mahofa
She further asserted that people who do not understand politics and those who defected to People First were peddling unfounded rumours that the First Lady was eyeing the highest political office in the country in order to portray Grace as an unreasonable and greedy person.
“I always mention it that Amai will never do that…only political novices think that she (Grace) wants to replace the President…No she does not harbour those ambitions.
“Where in the world have you ever seen the first lady replacing her husband? Go and read the constitution closely, nothing like that will ever happen,” said Mahofa.
However, members of the women’s league who attended the celebrations were not comfortable with Mahofa’s remarks on succession saying there was no need for her (Mahofa) to respond to rumours.
Mahofa – a well-known Grace ally, who has been in the press for dancing in front of Grace until she fainted, further said that the First Lady will not even be a Vice President (VP).
According to Mahofa, the two VPs were very senior in politics and Grace was only taking notes from them and not vice-versa.
“The VPs are her mentors. Amai is not that ambitious … do not be fooled by the Gamatox people who are circulating the rumours…do not be fooled please,” pleaded Mahofa.
Samson once contested in the 2008 harmonised elections for Chiredzi West constituency and lost to Moses Mare.
Share
Facebook
Twitter
Pinterest
WhatsApp
Previous articleMasvingo RDC drags Rio Zim to court over 300k debt
Next articleCouncil honours long serving employees