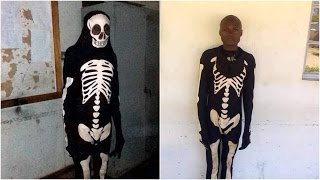 A Gutu man who torched a media storm last month after he was arrested for robbing his victims using a ghost suit has been jailed for three years for theft and robbery.

Norman Chagwiza (27) of Mutsambiwa Village under Chief Chisvino was on Monday June 7 sentenced to 48 months with 12 months suspended on condition that he does not commit a similar offence in the next five years, leaving him with an effective sentence of 36months.

The State case as presented by Prosecutor Bati Bati was that on May 13 2021 Chagwiza broke into Elizabeth Chipika’s house around 02:20hrs dressed in a ghost suit whilst armed with machete.

He allegedly threatened her with the machete and the spooky suit after which he took some money from her wallet and fled.

On May 25 this year Chagwiza climbed on the roof of Thomas Chivhura’s house with the intention of stealing the latter’s solar panel while dressed in his ghost suit.

When he was caught in the act, he tried to frighten his victims with the spooky suit but some members of the public who were courageous enough apprehended him and called the police, leading to his arrest.

In January 2020, Chagwiza, in the company of one Chipika and his three brothers who are still at large targeted a number of houses in Infill and Gonville locations in Gutu stealing car batteries

He is also linked to other unlawful entry cases that are still under investigation.