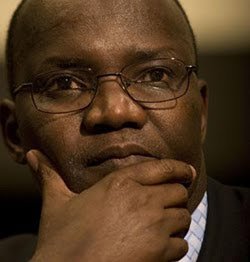 MASVINGO – Minister of Higher and Tertiary Education Professor Jonathan Moyo, who was expected to chair a Masvingo inter-district meeting at the Chiefs Hall over the weekend, left the province in a huff amid reports that he could not face a rival faction Team Lacoste which supports Vice-President Emmerson Mnangagwa, and allegedly lied that he was rushing to attend another inter-district meeting in Gutu where he never showed up.
Moyo, an alleged architect of another Zanu-PF faction, Generation 40 (G40), cited poor attendance as the major reason for snubbing close to 200 party members who had gathered at the Chief’s hall for the meeting.
The Zanu-PF politburo member met Masvingo senator Clemence Makwarimba and Masvingo West legislator Ezra Chadzamira and few others in town and told them that he was no longer coming for the meeting due to poor attendance, a message which was later passed on to the party members by Makwarimba.
“We met Prof. Moyo in town and he told us that he will not address the meeting because of poor attendance. We were expecting over 800 people today but the turnout is poor probably because there was information break down as well as the sudden change of the venue from Nemamwa to Chief’s Hall by Masvingo Urban legislator Daniel Shumba.
“This meeting was supposed to be an extension of the provincial inter-district meeting we held at Masvingo Poly recently but Moyo could not come here because we are few. We met Moyo in town and he said he was, instead, going to attend another inter-district meeting in Gutu,” said Makwarimba.
Moyo, who chaired a Masvingo provincial inter-district meeting a fortnight ago where Team Lacoste and G40 members heckled each other in front of him resulting in others leaving the meeting, is alleged to have dreaded the idea of confronting the Team Lacoste members and decided to excuse himself citing poor attendance.
Defiant Team Lacoste members who were at the meeting, however, openly denounced G40 by chanting ‘pasi neG40’ slogans.
Masvingo Urban legislator Daniel Shumba who allegedly changed the venue from Nemamwa to Chief’s Hall was also conspicuous by his absence at the meeting.
The visibly angry and hungry members who were served only oranges had no kind words for Masvingo district legislators Shumba (Masvingo urban), Davis Marapira (Masvingo North), Edmund Mhere (Masvingo Central) and Walter Mzembi (Masvingo South) whom they accused of having double standards.
“Our legislators have double standards; they take us for granted. They were supposed to attend the meeting but only Chadzimira (Masvingo West) is here. We cannot continue with this kind of leadership which is so into factional fights at the expense of building the party. We are happy that 2018 is around the corner and we will certainly boot them out and elect better candidates with the party at the heart,” said a member amid applause from the floor.
Marapira and Mzembi sent apologies saying they were out of the country.
The Gutu inter-district meeting which Moyo said was going to attend, was chaired by another politburo member who is also the Minister of Mines, Walter Chidhakwa.news

He who said it can not be done must not disturb the one doing it!
Share
Facebook
Twitter
Pinterest
WhatsApp
Previous articleNotorious carjacker attacks prosecutor during court procession
Next articleZanu-PF to expel non-compliant members