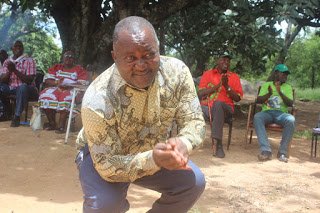 11 Feb 2017 – NEMAMWA – Alleged ‘Team Lacoste’ sympathisers, who are celebrating their dramatic recapture of the post of Zanu PF Masvingo provincial chair, are also locked on the horns of dilemma with glaring uncertainty as to whether President Robert Mugabe will accept Ezra Chadzamira as the new substantive chairperson.
Party provincial secretary for administration; Alois Baloyi told an inter-district meeting held in Nemamwa last Sunday that they will plead with Mugabe to accept Amasa Nenjana’s demotion.
“Firstly, I want to thank you for the job done on Saturday; it was a big job. Some might say it was mere jostling for positions but it was not. The real issue is about following party procedures. Chadzamira did not just regain his seat but it was the province which realised that his leadership is OK.
“All this is above board because Nenjana was acting and what we wanted was a substantive chairperson. Tinoda kukumbirisa shef Mai Mahofa kuti, hameno kuda vangazotifungira nepamwe, asi tatichida kukumbira chaizvo iko kuna Baba VaMugabe kuti vatitendere kuti zvatakaita izvi ndochaizvo-chaizvo zvinodiwa neMasvingo,” Baloyi said.
It is however still unclear whether the unpredictable Mugabe will throw his weight behind Chadzamira, but it is certain that if he refuses to recognise him, Team Lacoste’s recent gains would be thrown into disarray; while G40’s shaken confidence will be reinvigorated.
“Even if you go around the province, you will see that no one objects to this because the majority is saying that’s what they want. We were in Mwenenzi yesterday (Saturday) and to our surprise, Nenjana had already been chased away for purporting to be chairperson,” said Baloyi.
At the Mwenezi event the previous day, Nhenjana and provincial political commissar, Jeppy Jaboon were humiliated for ‘intruding’ into the ‘closed door’ meeting.  The two were forced out of the meeting with Nhenjana later disappearing as soon as Chadzamira and party whip, Lovemore Matuke arrived.
Jaboon was only allowed to speak later during the unveiling of the nominees who will contest in the Zanu PF primaries to select a candidate for the Mwenezi East by-election.
At that juncture, Jaboon took a swipe at factionalism and distanced himself from Nhenjana by describing the recent reappointment of Chadzamira as something that was above board, a move that could signal the fracturing of the G40 camp in the province.
At the Nemanwa gathering, Baloyi defended the elevation of Chadzamira but was quick to admit that Mugabe had the power to reverse everything.
“In every organisation, there is a hierarchy and those above can make their own decision. Those in higher offices can come up with their own resolutions but, as for now, we have forwarded our position to them.
“It should also be known that as a province, we have made a choice and what we did is what the people want. If the President says it’s wrong, we will accept what he says,” Baloyi said.
Minister of State for Masvingo Provincial Affairs; Shuvai Mahofa, who was guest of honour, indicated that no one will question the move saying it was done according to the Zanu PF constitution.
She was, however, quick to acknowledge that higher authority could reverse everything.
“It’s not a crime, and if you want to know Zanu PF, read the constitution. Don’t fight for a seat because if you fight for it, you won’t get any position. Masvingo has shown the way; no one will question us on what we did because it was done procedurally,” Mahofa said.
“Ko unoda kutonga wega ndiwe ani, people chose leaders, not a small grouping,” said Mahofa before chanting ‘pasi nevanoda kugurira, haisi zhira yekudhibha inonzi gurira neparuware!'politics