Man torches villagers’ houses to get wife back 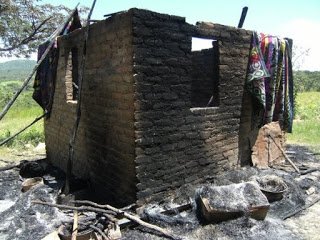 Memory Rasa
‘Hell hath no fury like a scorned man’ sound like the best words to describe the situation of Gutu villagers who are living in fear after a garden boy working for one of the villagers stole his former boss’ wife and eloped with her, leading to reprisal arson attacks against many villagers.
Sources say the garden boy ran away with his boss, Andrew Muchemwa’s wife to his uncle’s place in Makanda Village under Chief Gutu.
In a fit of rage, Muchemwa followed his garden boy and burnt down a house belonging to Lazarus Makanda, who is uncle to the garden boy, accusing him of harbouring the two.
Muchemwa is also said to have destroyed vegetable gardens belonging to Makanda’s neighbours after launching an axe-attack on Makanda’s nephew leaving the victim with severe leg injuries.
Though TellZim News could not get hold of Makanda, a neighbour whose vegetable garden was destroyed said she was shocked to wake up at night to see Makanda’s house on fire on 20 April at around 2300hrs.
Makanda escaped unscathed as he was sleeping in a different house when the attack happened.
Muchemwa allegedly went ahead to burn a house belonging to Thomas Makanda and another to one Chirimuhanzu, who are both neighbours to Makanda.
“Everyone is now fearing for their lives and property because Muchemwa does not care if you are involved or not. He has destroyed vegetables in our gardens and he lit my neighbour’s house shouting that everyone would suffer if they did not show him where his wife was,” said the neighbour.
“The whole village is being victimised now. We are having sleepless nights because anyone can be the next target. The police came but they could not get him but I think he is staying in the forests.
“Some people here are now leaving their cars in Mpandawana fearing that they may be torched as well,” said a villager who identified himself as Chibisa.
Acting Masvingo Provincial Police Spokesperson Assistant Inspector Kudakwashe Dhewa confirmed the incident but could not give further details.
“A case of malicious damage to property was reported on the 20th of April and the suspect is Andrew Muchemwa. We however do not know the cause of this behaviour since the suspect has not been arrested. We are currently looking for the suspect,” said Assistant Inspector Dhewa.news