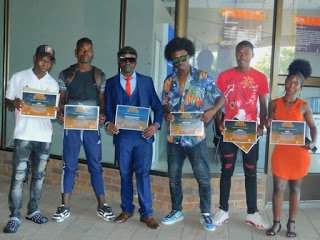 The
awards were presented on Hevoi FM on April 24 and were sponsored by Sarireni’s
hair food company, Elder Saraz Gangerlizer.

Sarireni
told TellZim News that he was proud of the artists who won the MAMA’s and he
was sponsoring all the winners with a free video medley this weekend to inspire
them to aim higher.

“I’m promoting all the artists who won the
music awards by sponsoring a medley video shoot to inspire our artists to aim
higher and continue making good music for Masvingo and Zimbabwe as whole.

“We have talent which must be nurtured, our
award winning artists deserve recognition and it is my dream to see our local
artists doing well,” said Sakireni.

He said
he presented the awards on Hevoi FM where voting was done through WhatsApp
using the link which was circulated on social media where everyone was eligible
to vote and the winners were presented with certificates.

“I
presented the awards on Hevoi FM and voting was done through WhatsApp using a
link which was circulated on WhatsApp and voting was open for two weeks,” said
Sakireni.

The
best female artist award  was given to Getrude
Tanyaradzwa Gweshe aka ‘Tanya’, upcoming male artist went to Kennedy Ganda aka
‘Kenny Gizzy’, best dancehall song was taken by Clarence Sithole aka ‘Clayper’
who also bagged the song of the year award.

Sithole
said he was humbled by the recognition and pledged to work harder to be a force
to reckon with in the entertainment circles.

“This
recognition will serve as an inspiration to me and my work. I hope to grow my
name in the entertainment circles and go beyond Masvingo and Zimbabwe,” said
Sithole.