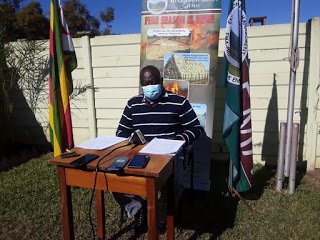 Masvingo province, which
is in the high risk category, recorded a total of 10 859.23 ha of area burnt
during the fire season which stretches from July 31 – October 30 each year.

Masvingo district recorded
6742.19ha of veld fires and was followed by Gutu district which had 3277.97ha.

The province however
did not record any loss of life due to veld fires which claimed four lives
nationally in the year 2020.

“Masvingo and Gutu
usually top the provincial records every year because of their location; it’s
wetter in Gutu and Masvingo but gets drier as you go southwards. As a district,
Gutu is grassland and because of that there are high chances of veld fires,”
said Muusha.

Bikita district took
the third position with a total area 608.94ha, while Mwenezi came fourth with a
total area of 585.11ha that were destroyed by fire.

Chivi and Zaka
districts have not been significantly affected and had a combined total of
245ha burnt.

“We are targeting 56
community awareness meetings and so far we have done 49 and we intend to
distribute 1 050 veld fires brochures and we are currently at 650. We have also
trained two firefighting teams and we have engaged a number of traditional
leaders and farmers,” said Muusha.

“The above normal
rainfall experienced in the province and country at large has resulted in
excessive fuel load build-up in most parts of the province thereby increasing
the risk of veld fires in the year 2021. We urge the communities to put in
place fire suppression measures and have readily functional and well-equipped
firefighting teams,” said Muusha.

Titus Gangata, a local
farmer who has been running his operations at Campria Farm, said there had
never been a fire outbreak at the place as all fire preventive measures were in
place.

“When I came here, all
the signs were there that the farm had suffered multiple fire outbreaks in the
past but there has never been more ever since. I have maintained a fire guard
around the farm and we are currently maintaining our road servitudes,” said
Gangata

…
as famers make a living from harvesting grass

Farmers in Kepura Farm
near Roy area of Masvingo district are making a good living through harvesting
grass which they use to make a number of products which they sell.

The famers harvest
grass for traditional thatching purposes as well as pruning it for commercial
thatching.

Munhondowafa
village head, Fanuel Munhondowafa of Kepura Farm, said he was earning a good
income which has enabled him to send children to school as well as to feed and
clothe them by selling the grass.

He said the area had
tall grass and which they cut for thatching and only realized that he could
make more from other products from the grass.

“All along, I have been
cutting grass for use as thatch since I settled here but in 2017, I realized
that I could make a living from making other products from the same grass.

“I now cut and prune
the grass which I then sell to passersby and other individuals who want to do
thatching in town. I then take the grass that is left during pruning and sell
it to those who want to do mulching in gardens as well as those who use it for
chicken bedding,” said Munhondowafa.

He said he now makes
chicken nests from the grass awhile his wife make brooms out of the same grass
which they cut in the veld.

Munhondowafa said grass
harvesting was a good way of preventing veld fires that often destroy the
ecosystems every dry season.

When we cut the grass, we
save a lot of other plants and creatures from fire. The areas where the grass
is cut small are the least vulnerable to fast-spreading veld fires,”
Munhondowafa said.

He said a number of
people in the area were also plying the same trade and this unites them as a
community in the fight against veld fires.

“A number of people
have since joined me in this trade and this unites us as a family and enables the
community to do firefighting if there is an outbreak,” said Munhondowafa.

He however said they
were facing a number of challenges from other people who were deliberately
starting veld fires for their own malicious reasons.

“If I could get
Ema-branded bicycle and work suits, I would be able to quickly respond to veld
fires even those that happen a long distance away,” he said