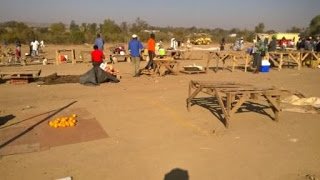 People woke up to a serene central business district today as City of Masvingo seems to have succeeded in driving out illegal vendors to the designated site at Garikai/Hlalani Kuhle Market popularly known as Chitima.
Council used hailers on Sunday, warning vendors not to leave their wares in the streets for the night as that was to be their last day on the streets.
The vendor hotspots at the BW building and the opposite open space in Leopold Takawira Street were unusually quiet this morning with no vendor in sight.
In Hofmeyer Street, municipal workers could be seen sweeping the pavements and mopping up the litter left during yesterday’s business.
Town Clerk, Adolf Gusha said council had strongly resolved to rid the city of illegal trading so as to create sanity in the streets.
“We did warn vendors yesterday (Sunday) that they vacate the streets. Council has since reached a resolution to keep the city clean so we will definitely take action against any vendor who decides to re-appear in the streets of our beloved city,” Gusha said.
At the designated site, some vendors could be seen using bare hands to clear new ground so that they could resume the business of the day.

Most of them did not have a kind word for the authorities, claiming tables they left at their old sites were either missing or have been destroyed during the night.
“We came early in the morning to find our display tables either wrecked or missing. How could they make the announcement on a Sunday when they know most people will not be around?” one female vendor could be heard saying.
“This place is not big enough to take all of us. I am clearing new ground so that I can set up my own stall here,” said Edison Chinaka who sells clothes and electrical goods. 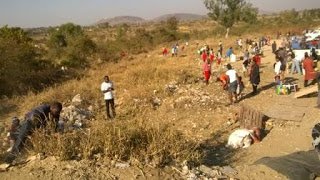 Masvingo Residents Trust (MRT) Chairperson Prosper Tiringindi said council could have done more to better to ensure a more orderly relocation.
“We are receiving complaints that some goods are missing and people are fighting over trading space at the so-called designated site. We think it has been done in a chaotic manner,” said Tiringindi.local
Share
Facebook
Twitter
Pinterest
WhatsApp
Previous articleBikita Minerals set to resume long service awards
Next articleZanu PF MP Chikwama attempts to disrupt MDC rally