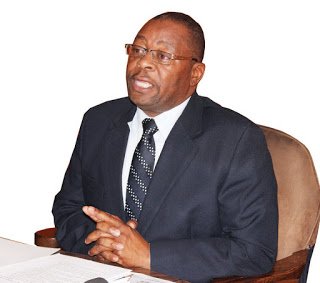 Mombeshora distances self from illegal settlers

Upenyu Chaota
The Minister of Lands and Rural Development, Douglas Mombeshora has distanced himself from the ever increasing number of illegal settlers who have taken over most parts of Masvingo North amid allegations of corruption by provincial land officers and village heads.
Mombeshora said it is the job of the provincial lands officers to see to it that there are no illegal settlers in their areas.
“The issue to do with illegal settlers can best be handled at provincial level. We have our technical teams who have all the mechanisms to ensure that there are no illegal settlers in their areas.
“They also know the definition of an illegal settler and if there is any, they have the power to evict such people. They do not report those matters to me as I don’t have first-hand knowledge of illegal settlers in all parts of our provinces,” said Mombeshora.
According to information gathered by TellZim News, Masvingo North Wards 8b and 32 are the most affected areas with higher numbers of illegal settlers than what government had predicted.
Wards 8b and 32 were designed to have fewer settlers than others since they lie on a catchment area between Popoteke and Mutirikwi rivers which feed into Lake Mutirikwi.
A total of nine farms on the catchment area were reserved for the resettlement of 429 people but the number of illegal settlers has reached over 450, which has seriously reduced the size of the grazing area and caused heavy siltation, posing a threat to Lake Mutirikwi.
Ward 32 councillor, Steven Munyenyiwa said the illegal settlers have taken over all the grazing area and no action is being taken by the responsible authorities to evict them.
“We confronted the then District Administrator, James Mazvidza and planned a demonstration against him in 2014 but we were stopped by the police.
“The National Technical Land Committee visited the area in 2014 and wrote a report to the Masvingo provincial Chief Lands Officer recommending the eviction of the illegal settlers but they never took any action,” said Munyenyiwa.
The Environmental Management Agency (EMA)’s 2015 state-of-the-environment report for Stanmore B village suggests that government was supposed to take action since there was rapid land degradation in the Mutirikwi river catchment area.
“Since the community has increased the area it is cultivating beyond the size initially planned and since there are reports of suspected illegal settlers, there is need for other departments like the Ministry of Lands, the District Administrator’s office and the Livestock Production Department to carry out an assessment on whether the human and livestock carrying capacity of the area has been exceeded,” reads part of the report.news