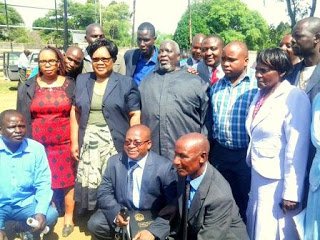 At least 300 people in party structures from all seven districts of Masvingo province who were supposed to meet their leader, former Vice President Joice Mujuru at a secret venue in Masvingo last week finally made arrangements and went to Harare where they held a no-holds-barred meeting with Mujuru on Thursday last week, TellZim News has learnt.
The meeting saw almost everyone from Tendai Biti’s People’s Democratic Party (PDP) provincial leadership except the chairperson and his secretary going all the way to Harare where they pledged their support for Mujuru.
PDP national executive member and former Masvingo Central legislator Jeffryson Chitando confirmed that he attended the meeting in Harare saying it was high time they moved away from small corners and join the majority in fighting the Mugabe regime.

“I attended the meeting; in fact I was the one who gave the vote of thanks. We are saying to Biti, look, it does not help to fight from our small corner, let’s have Mujuru as our president,” said Chitando.
Chitando quoted the book of Isaiah saying there was need for people to come and reason together in order to defeat ZANU-PF.
“There is nothing to hide here, we are now People First. I am already mobilising in the constituency and we shall never be after positions. All we want is to remove Mugabe and his wife Grace,” said Chitando.
TellZim News also learnt that war veterans from all seven districts of Masvingo were at the Harare secret meeting.
One war veteran who attended the meeting and refused to be named said they were convening a provincial meeting where they will officially announce their support for Mujuru. 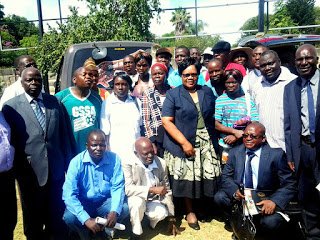 “We are convening an emergency meeting as war veterans so that we pledge our support for Mujuru. She is our Bishop because she is going to give us direction in as far as political leadership is concerned….we are tired with Mugabe and his wife Grace because they take us as children and yet we went to war for the liberation of all,” said one of the war veterans.
People First provincial spokesperson Kudzai Mbudzi confirmed the development saying the meeting had to be held in Harare for security and strategic reasons.
Mbudzi said people from Masvingo who attended the meeting unanimously called for the immediate launch of the party.
“The loud voice was that let’s launch the party now. Mai Mujuru accepted the call and promised that the party will be launched early next year. She also assured people that she (Mujuru) was not being pushed by anyone else … she had seen it fit to fight ZANU-PF,” said Mbudzi.
Mbudzi said it was all joy after the meeting when people from each district took turns to have photo sessions with Mujuru.
In his rating, Mbudzi said Masvingo province had the highest number of people who met Mujuru and the entire national leadership.
This publication was informed that former MPs who include Rensome Makamure, Oliver Chirume, Enerst Mudavanhu, Irvine Dzingirai, Kudakwashe Bhasikiti among others attended the meeting.
Prominent Masvingo lawyer, Rodney Makausi of Saratoga Law Chambers also attended the meeting.
Share
Facebook
Twitter
Pinterest
WhatsApp
Previous articleCouncil signs US$73m deal with Chinese company
Next articleWoman dumps live owl, snake at Gutu RCZ church