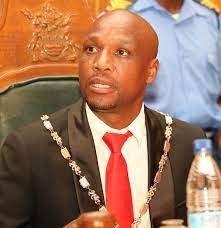 City of Mutare has
attributed the deterioration of service delivery to unpaid debts which have
ballooned to $400 million.

TellZim organized a
feedback and engagement meeting between city officials and residents yesterday,
April 09, and it was heard that residents owed council enormous amounts of
money.

Speaking at the event,
Mutare Mayor Blessing Tandi said the situation was a setback which militated
against efforts to provide optimum services to all residents.

He said the local
authority failed to provide adequate services because residents were failing to
pay their bills in full and in time.

“The council is failing
to provide adequate services because the residents are failing to pay their
bills and they owe us up to $400 million. Residents should assist council to do
its job by paying their bills in order to get better services,” said Tandi.

The mayor also revealed
that the recent rate hike was necessitated by the need to improve revenue, and
not to make profit as local authorities are nonprofit-making organizations that
survive on what residents pay to it for services.

“The hike in rates is
because the council is trying to raise money to improve service delivery and
not to make a profit from the residents. Council survives solely on money paid
by the residents,” said Tandi.

He said council could
barely afford to maintain infrastructure such as roads, sewerage, and water
pipes that often burst across the city.

“As council, we are
failing to maintain the roads, sewerage and the some pipes that burst. As
things stand, we also do not have adequate capacity to provide all the water
that is needed in such residential areas as Dangamvura,” said Tandi.

Some residents,
however, said council should not continue making life harder for residents, but
should rather find ways to force Zinara to fund the maintenance of some council
roads as it was making enormous amounts of money at the tollgates and in vehicle
licensing fees.