Of Covid-19 And Child Marriages: Indigenous Churches Taken To Task 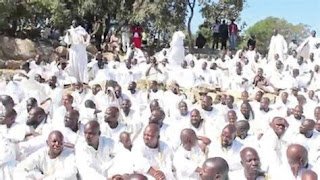 Recent weeks have seen an outcry by various civic society organizations over the continuous treachery acts by some indigenous and apostolic sects who have been committing underage girls to marriage in the guise of church doctrine.

Following the death of Anna Machaya (15) who died whilst giving birth at a Marange shrine on July 15, 2021 after her parents who previously are alleged to have initially offered her nine year old sister to the perpetrator for marriage, CSOs have intensified efforts to bring a halt to the doctrine.

As  calls to end child marriages by CSOs became louder, the Zimbabwe Republic Police (ZRP) went on to arrest Hatirarami Momberume (26) and the late Anna’s parents for their role in the unjustified act.

Momberume has since appeared before Mutare Regional Magistrate Lucy Mungwari,  facing charges of murder and having sexual intercourse with a minor while Anna’s parents faced charges of obstructing the course of justice.

Civic society organizations have called for authorities to descend heavily on perpetrators and accessories to child marriages whom they have been watching break the law willy-nilly.

“We have stepped up our efforts to address the issue of child marriages through various engagements with ordinary church members and their leaders.

“Our main   focus is on Christianity and African Traditional Religion (ATR) groups where we teach them about women empowerment and educate them constitutionally enshrined rights for young women,” said Kahiya.

She went on to express her displeasure with the Johanne Marange activities which are in contrast with the dictates of the Constitution of Zimbabwe.

“We are not happy with what transpired at a Johanne Marange sect where a teenager died whilst giving birth. No one is above the law, everyone has to implement the law and the church must stop forced child marriages,” said Kahiya.

“We carry out community based awareness campaigns where we include traditional leaders, councilors, Members of Parliament (MP) and churches educating them on the rights of the girl child and we also work with men and boys.

“We have realized that men can stand and be the ambassadors of the girl child rights,” said Magwanyata.

Shamwari Yemwanasikana has also introduced the World’s Children Prize (WCP) initiative in an effort to capacitate young girls who would  have fallen prey to sex predators to have courage to speak out and notify relevant authorities.

Musasa Project Advocacy Officer, Rotina Musara said as part of their advocacy work, the organization has a pillar that speaks against toxic religious practices which expose young girls to child marriages.

“As Musasa we engage with religious communities and seek to find a common ground that does not enable toxic practices in the name of faith, while violating rights of girls and women.

“We engage various stakeholders so that they understand that freedom and the right to religion is supposed to be by choice not by force,” said Musara.

“When we come across cases where teenage girls have been impregnated and forced into marriages we seek the intervention of law enforcement agents. We assist parents of the girl to make police report so that criminals can be arrested.

“Currently there are ongoing campaigns of which most of them are online campaigns. However, we also have seasonal campaigns, for example in December we have the Gender Based Violence (GBV) campaign,” said Chivasa.

Another 13-year-old, Violet Mushati was reportedly married on July 18, three days after Anna died during a church conference at the same Marange Shrine and her whereabouts are still unknown  to date.

The apostolic sect has been caught on the wrong side of the law many times when it comes to child marriages and it is estimated that one in four girls are married before reaching the age of 18.