Of Masvingo City Council and Its Sewer Pipeline 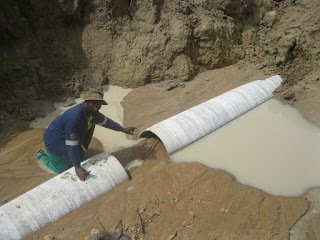 Lloyd Shunje
They say do not count your chicks before they hatch, but when the 21 days pass and there is still no sign of a chick then the mother hen is considered to have failed to live up to the expectations of the master.
The forever-under-construction sewer pipeline which connects Runyararo West Suburbs and the main trunk sewer in Eastvale must have broken many people’s hearts especially those who had counted on the “unhatched egg” as period that was agreed between the council and the contractor is over nine months long overdue, despite the contractor having been paid in full.
To add more insults to the already failed job, the contractor is alleged to have demanded more money, raising a lot of questions on the criteria the council use in awarding such tenders.
What contractor would come and go as he pleases if all and sundry on how tendersare awarded were done?
Masvingo Mayor Hubert Fidze chose to play his favourite tune again this time, saying the problem, like many others council has failed to address, was “inherited”.
“The problem we are facing concerning the trunk sewer pipeline was inherited from the previous council,” said Fidze.
He added that the cost for the project was underestimated which poses the million dollar question: How was the contract awarded and why then did the contractor acceptthe money if he was aware that it was not sufficient enough to undertake the project?

No sign of progress … blocked sewer pipeline
“The cost of 1.5 million that was intended to cover the whole project of the trunk sewer pipeline was underestimated,” said Fidze.
The shoddy deal  once threatened to be a ticking time bomb as councillors, in one full council meeting last September questioned the management on why they were being reluctant to take the contractor to court for failing to fulfil the terms of the contract but that again died a natural death.
The councillor probed the council why they were letting a mere contractor get away with murder at the expense of ratepayers money, and why council was not suing the contractor for the inconvenience which in a way shed light on whatever scam there is about the sewer pipe.
“The contract was supposed to have been awarded to a company with enough machinery which council would pay upon completion of the job,” said the councillor.
As if that was not enough, the trunk sewer pipe has been left just like that and it started with babies being dumped into the trenches and mosquitos having their breeding ground there, and now nobody really knows where this will go.
One Rujeko citizen once joked that the woman who once dumped her baby into the pipe trench has since finished her prison term only to come back to the unfinished project which obviously would trigger unpleasant memories.
The contractor also reportedly duped his workers who were working on the sewer pipe, and one of the workers revealed that no supervision of the pipes was made before they were covered, which reflects on the substandard sewer pipe to be gotten after all this time.
Perhaps like the Masvingo Poly roundabout, Masvingo will get the so much awaited sewer pipe, but everyone can rest assured that it is not anytime soon as the pipes installed are already blocked on a number of spots.
The mayor has also confirmed that Masvingo still has to wait more as there is no specific timeframe as to when it will be completed.
“I cannot give a specific time frame on when the project will be complete. Now the project is now in our hands, we have engaged council engineers to take over the project,” said Fidze.
What everyone is waiting for is not to see the council suing the contractor who “failed” them but to see light at the end of the tunnel, which at the moment is still very gloomy.
Since the mayor could not specify on when the project will be finished, all the ever-patient ratepayers have to do is to wait for the local engineers that have taken over the project or it remains what it is—a pipe dream that never was.Local