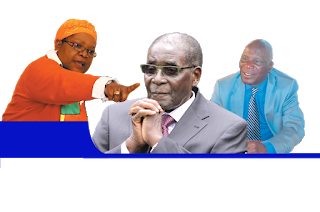 …tell-all explosive book on cards
… blow by blow account of Zim demise since 1980
TellZim Reporter
The Joice Mujuru-led Zimbabwe People First (ZPF) party is in the process of publishing a book documenting the atrocities allegedly committed by President Robert Mugabe and his government since 1980, TellZim News has learnt.
The book titled The National Grievances, authored by the party’s Masvingo provincial spokesperson Retired Colonel Kudzai Mbudzi will soon be distributed throughout the whole country.
In his own words, Mbudzi said it was time for Zimbabweans to come face to face with reality.
“We can’t continue to pretend as if we don’t know the truth … Zimbabweans have been taken for granted over the years but it’s now time for them to be told the truth. People need to know how the Mugabe regime destroyed our economy.
“We shall not hide behind the finger leaving millions of people confused – it’s their right to know and as a party, we are there to document how it happened so that people will be in a position to map their way forward,” said Mbudzi.
According to Mbudzi, The National Grievances is a must-have book which gives a blow by blow account of Zimbabwe’s demise since 1980.
“The book summaries our grievances as a people and it also exposes Mugabe as a very deceitful leader who rules with an iron fist. It narrates how innocent people in Zanu-PF were persecuted by Mugabe as well as giving a vivid illustration of how Mugabe allowed himself to outgrow his usefulness. There are sections that give detailed information on how Mugabe created pseudo hope in ZimAsset and his endless lies about sanctions.
“In fact the book exposes Mugabe as Zimbabwe’s problem number one. Today, at the age of 92, Mugabe is totally useless, as would be the case with any nonagenarian great grandparent,” said Mbudzi.
The book which has about 25 chapters/topics also touches on how Mugabe created an economy of sex workers and vendors and how tertiary education, particularly in universities and colleges, was cheapened.
The book also highlights Mugabe’s concerted efforts in stifling the media, building the Gushungo dynasty, manipulation of Christians and Mujuru’s strategy to rescue Zimbabweans.

He who said it can not be done must not disturb the one doing it!
Share
Facebook
Twitter
Pinterest
WhatsApp
Previous articleMasvingo Talent Show kicks off
Next articleHIV+ patients lament lack of viral load testing machines