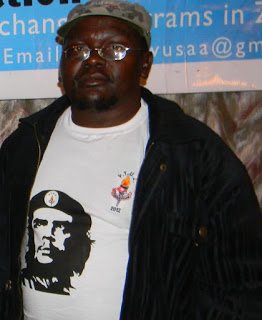 PTUZ gears up for annual conference

Share
Facebook
Twitter
Pinterest
WhatsApp
Upenyu Chaota
The Progressive Teacher’s Union (PTUZ) will from the 10th to the 13th of December 2015 hold its annual conference at ZESA Training Centre in Harare where they will deliberate on issues that have affected the profession which they describe as ‘cold and calculated vandalism’.
This year’s conference will be running under the theme, “Education under Siege”.
PTUZ president Dr. Takavafira Zhou told TellZim News that the teaching profession has become a punching bag for every Tom and Dick and they are calling for immediate action to restore the dignity once associated with the profession.

PTU president Takavafira Zhou
“A lot of things have happened without the teachers being consulted. All is dictated and they want teachers to say yes. Teachers have to be consulted on matters to do with their profession and be involved in all decision-making.
“Right now we have a defective curriculum and the government wants to give an impression that it is consulting yet they are not. They bring documents to us which they already have answers for. This is why we have chosen the theme “Education under Siege,” said  Zhou.
Zhou added that the government has lost all respect for teachers and it is stepping on the profession left, right and centre.
“Recently, the government sent an audit team to schools and a lot of teachers were affected. Genuine teachers could not receive their salaries for 3 months all because the audit was done by incompetent people.
“The Public Service wants to reduce its expenditure and teachers get caught up in the crossfire. Trainee teachers had their salaries cut by half and we ask why? There are trainee nurses, soldiers and police officers but we have never heard about them receiving half their salaries,” Zhou said.
He added that schools have been turned into war zones and there is no political will to invest in education.
“The 2016 budget does not cater for the education sector and much less for the well-being of teachers. Teachers haven’t been given any salary increment for years on end.
“Teachers are being asked to get their pay on weekends and not during the week. Public service inspectors are always in schools, creating a reign of terror in the education institutions. We never see these people in army barracks or police depots. This is why we say education is under siege,” added Zhou.
Zhou said that the conference will be attended by teachers’ unions from SADC which are affiliated to the Association of the Non Aligned Teachers’ Union of Sothern Africa (ANTUSA). The biggest teachers’ union from Britain, National Association of School Masters and University Women Teachers (NASMULT), will also send a delegation to the conference.