Residents Fume Over ‘Unsanctioned’ Use Of CDF 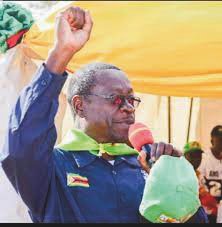 CHIREDZI- Residents in the Lowveld town are up in arms with their legislator who they accuse of not consulting them and channeling Constituency Development Funds (CDF) allocation towards less important developmental projects.

Chiredzi West Member of Parliament, Farai Musikavanhu intends to use ZW$1 million of his CDF allocation to refurbish Tshovani Stadium to restore the facility to its heydays.

Residents allege that the legislator was prioritizing the sports facility for political mileage since he is  patron of Chiredzi Stars Football Club (FC), who use this facility for training sessions and their Eastern region Division One home matches.

Chikumbo said there were more pressing issues which could help the community to deal with the Covid-19 pandemic.

“Chiredzi is at the apex of Covid-19 hotspots, therefore the money should be channeled towards efforts to manage the pandemic and purchase of infrastructure that would help to reduce its effects and spread of Covid-19 .

“We call upon all MPs in Chiredzi District to come together and help in the struggle to upgrade Chiredzi General Hospital and improve service delivery which is in a deplorable state,” said Chikumbo.

Contacted for comment, Musikavanhu however said there is no turning back in the Tshovani stadium upgrade which he says was approved by parliament.

“The refurbishment of Tshovani stadium was approved by Parliament and Chiredzi Town Council. Access to recreational facilities is considered a priority within the overall NDS1 program.

“I made a pledge in 2018 to assist council in refurbishing this key infrastructure which serves not just the urban wards of Chiredzi West Constituency but Chiredzi District at large. We planned this before my recent appointment as Chiredzi Stars patron,” said Musikavanhu.

Residents’ concerns come at a time when the district only has one referral hospital; Chiredzi General Hospital.

Some residents and villagers in rural communities walk for long distances to access healthcare facilities.

Access to healthcare is in a worrisome state in the Lowveld as Chiredzi General Hospital continues to use old and dilapidated infrastructure.