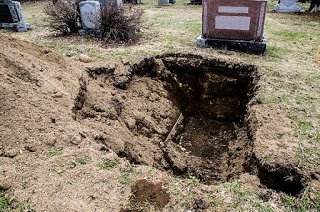 Shock as grave is opened a week after burial

ZAKA –A
man who lost his daughter who stayed in South Africa suffered double tragedy
after he got stabbed by his younger brother after a misunderstanding over a
hole which was found on the late daughter’s grave.

Anthony
Chengetanai of Rudhanda village under Chief Bota area woke up one morning to
find a deep hole on the grave of his daughter who had been buried for almost
one week.

As
the family tried to come to terms with the incident, Chengetanai and other
family members disagreed on the next step resulting in him being stabbed by his
younger brother.

Masvingo
Provincial Police spokesperson Inspector Kudakwashe Dhewa said they had not
received any report of both the assault and the grave incident.

“We
have not received any report of both incidents, we however urge members of the
public to report cases of similar nature to the police,” said Dhewa.

Chengetanai’s
daughter, Evidence died on March 05, 2021, after a short illness in South
Africa where she was working and was repatriated back to Zimbabwe where she was
buried in Zaka on March 13.

Chengetanai
told TellZim News that the mystery surrounding the gaping hole on his
daughter’s grave led to friction among family members as people suspected each
other of performing dark rituals on the grave.

“My child died in South Africa after short
illness. We buried her at our family grave site and as per custom, we went
there the following day and all was well.

“After
a week we visited the grave site with the intention of putting up material for
the unveiling of the tombstone. We were shocked to find a deep hole close to the headstone but there was no footprints,” said
Chengetanai.

Chengetanai
said that they consulted some prophets who told them that there were some
people who had tempered around with the deceased.

“We
went to consult some prophets who told us that there are some family members
who tempered with my daughter’s spirit and could be using it to do something
bad,” said Chengetanai.

He
went on to claim that other family members were against the idea of backfilling
the hole, a disagreement which got him stabbed with a knife.

Chengetanai said he suspected the sibling who
stabbed him had something to do with what happened at the grave as he was
opposed to the hole getting plugged.

“I
was stabbed by Lovemore who seemed to know something about what is happening
and is trying to silence me before I expose those involved. I was rushed to Musiso
Hospital where I was stitched on the wound and was discharged.

“We
need help because we now hear some strange noises at home during the night;
ysterious footsteps of people running and mysterious voices,” said Chengetanai.