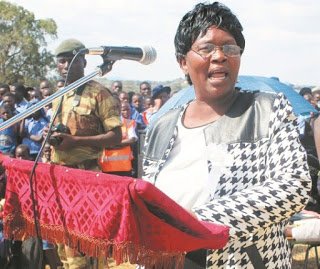 –The feud between school heads and the Acting District Schools Inspector (DSI) Beaula Shambambeva is raging on with the peeved heads signing yet another explosive petition accusing their boss of abusing Better Schools Programme Zimbabwe (BSPZ) funds, TellZim News can reveal.
In the latest petition, which is addressed to the Provincial Education Director (PED) Zedius Chitiga, the National Association of Primary School Heads (NAPH) and National Association for Secondary School Heads (NASH), the school heads dispute the DSI’s recent claims that she was ‘financially clean’, implying she was untainted by corruption.
When contacted for comment, Shambambeva said she had not yet seen the petition herself, claiming that the school heads never give her a copy of the petitions whenever there are any.
“Whenever they write their petitions, they do not give me a copy. It happened with the first petition when they forwarded it to all else but never bothered to let me have a copy. I am hearing it from you now that there is another petition against me,” said Shambambeva.
TellZim News, however, managed to have a glimpse of the petition which disparages Shambambeva for a host of alleged misdeeds bordering on corruption and abuse of office.
“In pursuance of the petition against abuse by the Acting DSI Mrs B. Shambambeva sent to you earlier and also in response to the Acting DSI’s statement that she was untouchable because she is ‘financially clean’, we wish to draw the attention of your honourable office to the following ….”
They then go on to list and explain Shambambeva’s alleged transgressions which are intimidation, abuse of funds from BSPZ and elsewhere, abuse of power, and abuse of a BSPZ car.
“It is not clear to us whether the Acting DSI Mrs Shambambeva has accounted for the following NAPH and NASH funds given to her on the understanding that she would attend the NAPH Heads conference in 2016 – Victoria Falls and the NASH Heads Conference – Kariba-2017 because she never attended the two conferences. She was given $750.00 ($250.00 per NAPH circuit) in 2016 and $400.00 in 2017 for the NASH conference,” reads the petition
The heads also complain about alleged abuse of BSPZ funds to compensate Zaka High School teacher (name supplied) whose car was involved in an accident while carrying out official tasks.
“The Acting DSI is on record indicating that policy prohibits the use and repair of personal / private vehicles with public funds and use of private / personal vehicles for official business. We also continue to query the statute which authorized the engagement of Mr (name withheld)’s vehicle for DASSAF and PASSAF activities.
“We as major stakeholders in the BSPZ project seek clarification on the use of BSPZ funds to repair Mr…’s accident damaged Nissan Note ADQ 8249 vehicle following an accident which occurred on 04-07-2017 during the PASSAF activities. Mr… claimed   $650.00 for his accident damaged vehicle,” the petition reads.
DASSAF and PASSAF refer to the District Annual Science Sports and Arts Festival and the Provincial Annual Sports Festival respectively.
In the petition, the heads also seek to know the developments concerning investigations of a break-in which happened at BSPZ offices earlier this year.
We also wait to hear of the position of the break in at the BSPZ centre nothing has been said to us and parents as key stakeholders. ‘Pakambobiwei? Zvava papi?’ We greatly feel that we deserve to be informed of such developments,” reads the petition.
Sources allege that the break-in was swept under the carpet because it is suspected that a person related to Shambambeva was involved.
They also accused the DSI of ignoring the problems at Nhema Primary allegedly because she is friends with school head Georgina Mushauri whom they claim was being used to collect bribes on Shambambeva’s behalf.
“It has become public knowledge that the Acting DSI demands ”chomusha” to all those who do business with the district office, workshops, NAPH and NASH meetings and teacher transfers inclusive. For instance, Mrs Shambambeva was given $50.00 through EcoCash from one Mrs (name withheld) of Masvingo-Ministry of Arts and Culture in July. This did not go down well with her such that she went on to attack the function organisers. “Kundigovera mari yemudistrict rangu? Tingadaro here?”
The tiff between Shambambeva and the heads broke into the public domain after the signing of a petition alleging among other things emotional and verbal abuse by the DSI.
In the wake of the first petition, Shambambeva fired back and told the heads that if she was to be fired, she would take them along as she claimed that for a long time, she had been covering up for their misdemeanors.
The petition was also copied to The Permanent Secretary in the Ministry of Primary and Secondary Education Dr Utete-Masango, Zaka district President’s Office, District Public Service Commission manager Euvencio Hungwe, provincial Public Service Commission manager, a Mr Makuza.
Masvingo Provincial Education Director (PED) Zedius Chitiga could not be reached for comment by the time of going to press as his mobile phone went unanswered for days. Repeated efforts to get comment from his office were fruitless as his office insisted that he was in a meeting.local
Share
Facebook
Twitter
Pinterest
WhatsApp
Previous articleKwese TV fever grips Masvingo
Next articleCatholic Diocese of Gweru Bishop dies