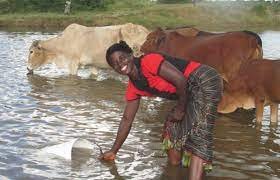 ZAKA –
A total of eight villages with over 200 households in Zaka West constituency
are reportedly sharing a water source with domestic animals from a seasonal
Mupiri river, which only flows during the rainy season, TellZim News can
report.

Ward
24 Councilor, Stella Shambira said the area is depending on seasonal river
water, since the borehole which had been installed soon after independence had collapsed.

“There’s
a Vidco here in my ward with around 1000 people which depend on water from
seasonal Mupiri River. The community shares water from that same river with
domestic animals which causes it to collapse,” said Shambira.

Shambira
told TellZim News that people from the area walk a minimum of 7 km to
neighbouring wards in search of clean water.

“During
dry season, most residents walk a distance of 8 km just to fetch water from the
nearest boreholes which is in ward 27 and 28.

She
called upon the government to help the community by installing the borehole
which Minister Ezra Chadzamira drilled soon after 2018 elections.

“The
only borehole we had in the community was drilled in 1980 and it has since
collapsed. Minister Ezra Chadzamira drilled a borehole for us in 2019 after elections
but it is not yet functional.

“We
call upon the government to intervene and assist the affected villagers in any
way they can,” said Cllr Shambira.

In
2014, the United States Agency for International Development (USAID) which went
on to collapse due to incessant rains usually experienced in the area.

ChinaAid
reportedly tried to drill a borehole in the community last year but the project
stalled midway after it collapsed.

Many
villages across Zimbabwe are facing challenges accessing clean and safe water
due to broken down infrastructure, leaving them with no option but to resort to
unprotected water bodies.