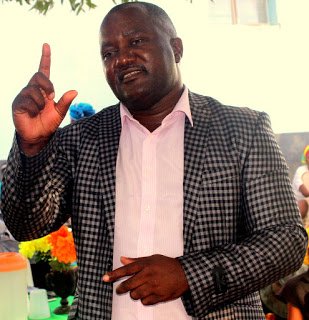 ZANU-PF provincial executive has recently suspended eight (8) Bikita councillors for allegedly working with the former Vice President Joice Mujuru and her allies in the province as well as distributing food aid to non-ZANU-PF members in their wards.

Zanu PF Masvingo provincial chair Ezra Chadzamira Ruvai
Councillors Dakarai Chitokomere of Ward 6, Nathan Zeya of Ward 8, Sign Mukanganwi of Ward 10 and Thomas Mafanise of Ward 16 were given their suspension letters on Wednesday last week.
Makuvaza of Ward 5, Mukaka of Ward 23 and Peason Mutume of Ward 24 were yet to receive their official suspension letters by the time of going to press but sources confirmed that they were also on the suspension list.
Suspended councillors who spoke to TellZim News said other allegations being levelled against them include that of not having cordial relationships with party chairs in their wards. They are also being accused of giving opposition party supporters food aid donated by non-governmental organizations.
“We were called to the ZANU-PF district offices on Wednesday where Amasi Nenjana, Isaac Mashanda, Thomas Chireshe and other party bosses gave us suspension letters. My suspension had several accusations including working with former Vice President Joice Mujuru in bringing down ZANU-PF,” Mafanise said.
“Other accusations included giving food aid that comes from non-governmental organisations to everyone instead of giving it to ZANU-PF supporters only, which is not practical to me since my induction as councillor taught me not to politicise food aid from NGO’s. I am also being accused of absconding party meetings. I know nothing about all these allegations,” he added.
“My suspension letter said that I do not work well with party ward chairperson. I am surprised since I had previously reported that my ward chairperson had barred me from calling her. How could I have had a cordial working relationship with that person? The party has also accused me of receiving goods donated by Mujuru to my ward which I am not aware of. I have also asked them to provide proof that I am working with Mujuru but they have failed,” Zeya argued.
Mafanise confirmed that if he is expelled he will be comfortable to make Mujuru’s camp his new home though Zeya sounded reluctant saying he will just sit until another opportunity comes his way.
“What would you expect me to do? If sacked, I will just join Mujuru. All I look into is settling in a party with a revolutionary background,” Mafanise said.
“If fired I will just sit. Where would I go? I had settled for ZANU-PF and no other party but since I will not be affiliated to any party if expelled, when opportunities come, I will move and advance my political career,” added Zeya.
ZANU-PF Masvingo Provincial Chairperson Ezra Chadzamira confirmed the suspensions though he would not make further comments arguing the fate facing the councillors in question were still under investigation by the disciplinary committee.
“In ZANU-PF we do not just fire but we follow disciplinary procedures. It is after we received reports that these councillors were working with Mujuru that we engaged the disciplinary team to investigate on allegations they were facing before we can take any action. The disciplinary team led by Amasi Nenjana will have to provide such evidence (that they are working with Mujuru) against these councillors if they are to be fired. We do not just fire without any evidence,” Chadzamira said.
These suspensions are coming barely a fortnight after ZANU-PF politburo member Josaya Hungwe urged the Masvingo provincial party executive to slow down when it comes to expelling fellow members from the party.
Share
Facebook
Twitter
Pinterest
WhatsApp
Previous articleJaboon difies Hungwe
Next articleTsvangirai slates 5 rallies for Masvingo