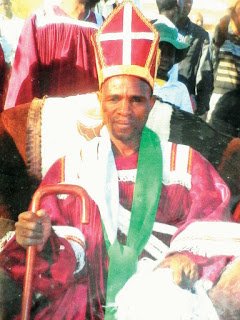 Upenyu Chaota
Zion Apostolic Faith Mission (ZAFM) Bishop Jameson Pedzisai, who is brother to Archbishop Ezra Pedzisai, has shed light on the construction of the Museva headquarters in Chivi saying contrary to media reports, Chivi Rural District Council Chairperson, Killer Zivhu did not build the church.
Bishop Pedzisai said ZAFM was given building material in 1986 to build a learning community hall but with time people decided to use the hall as a church since there was no proper place for worship services.
“I want to set the record straight here. Let it be known that the ZAFM Museva headquarters in Chivi was not built by Zivhu but the initial construction begun and was completed way back in 1986.
“We hear media reports saying Zivhu built the church and I begin to wonder where the people are getting the information from. At the time the church was built, Zivhu was doing Grade 4.
“This church was first built by the late Bishop Dorius Pedzisai Shoko. As the number of people increased, the mother union of the church decided to do extensions on the church building and they bought cement and asbestos and Mr Simbiso Matambanadzo did the construction,” said Pedzisai adding that the extension was done between 2002 and 2003.
“Between 2009 and 2010 we started building toilets and that was when Zivhu chipped in and donated cement for the job. In January this year, Zivhu offered to refurbish the church saying he was a friend of our father and wanted to do plastering and repainting of the church in his memory.
“We deeply appreciate what he has done for the church because the building was looking very old and now it’s looking good. I have taken it upon myself to clarify the matter so that people will not be subjected to a distorted history,” added Pedzisai.
After the refurbishment, the church was officially handed over in March with Zanu-PF Deputy Secretary for Women Affairs Eunice Sandi Moyo standing in for the First Lady Dr Grace Mugabe as the guest of honour.news