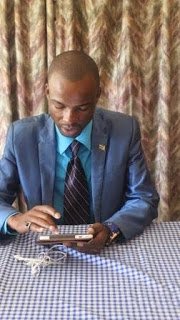 Buisness at Masvingo’s Garikai ‘Chitima’ market came to halt this morning as demonstrations against council police’s action to close the market gates in reaction to vendor’s refusal to pay their daily fees.
Vendors angrily unlocked the gates and unarmed the council police who were guarding the closed market.
Riot police came soon and displaced the demonstrating vendors. Police also arrested six members of Masvingo Residents Trust (MRT) Prosper Tiringindi, Godfree Mudhumo, Mativenga Mapfumo, Tarwirei Chisikandireyi, Richard Mapeza and Jesina Gwabvira who mobilised the vendors to demonstrate.
Speaking in an interview before his arrest, Masvingo Residents Trust chairperson Prosper Tiringindi said the residents had the right to protest as they have rights to be heard especially towards service delivery issues and reduction of taxes which was the cause of their protest.

Prosper Tiringindi
“Masvingo Residents Trust is proud to support vendors in this demonstration in which they are demanding to be heard and addressed by the city fathers. Service delivery, especially at Garikai market being the biggest market is important as the vendors had gone for long without either a toilet or proper canteen which is a serious health threat to the general populace,” said Tiringindi.
The Mayor Hubert Fidze however emphasised that there was nothing wrong with council police action to close down the market if vendors resisted paying revenue as they had agreed with the market representatives.
“There was actually nothing wrong with council closing gates at the market as the council police were practicing their duties. We met recently with the market committees and agreed that they continue paying up the two dollars fee for a month as committees sit and strategies on the one dollar fees per day they had asked for.
“In terms of sanitation, we are working on that and I rely want it to be clear that progress is in course to bring development to the market. We also wish to deal with the ever increasing number of vendors mushrooming in town evading paying council revenue as there is enough space for them to operate from,” said Mayor Fidze.local
Share
Facebook
Twitter
Pinterest
WhatsApp
Previous articleMPs sleeping on duty urged to wakeup
Next articleTeachers forced to pay money for independence