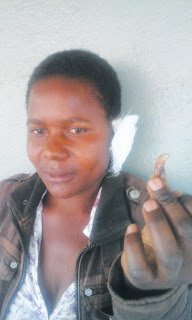 Increase Gumbo
A Chiredzi mealies vendor, Muchapareva Mbaimbai was left without her left ear after she was attacked by another vendor on Monday over a US$2 debt she has owed her  since December last year.
Mbaimbai told TellZim News that she was attacked by the woman she identified as Mai B whom she owed the US$2.
“She approached me at Shingai Market where I was making some orders and made enquiries concerning the debt. I then told her to come home rather than demand her money in a public place.
She then became angry and grabbed my throat and pinned me down before a certain passer-by restrained her,” said Mbaimbai.
She said her attacker then went away only to come back a few minutes later with more vengeance.
“After a few minutes she returned and  violently grabbed my hands then bit off a part of my ear and spat the piece of the ear on the ground…a man who was close by grabbed her to end the commotion,” said Mbaimbai.
Mbaimbai was then taken to Chiredzi General Hospital where she received medical attention and the case was reported at ZRP Chiredzi Police Station.
Attempts to get a comment from the Provincial Police Spokesperson Charity Mazula were fruitless since she had not received the report by the time of going to print.news

He who said it can not be done must not disturb the one doing it!
Share
Facebook
Twitter
Pinterest
WhatsApp
Previous articleWe won’t campaign for MPs this time: Ndaarombe
Next articleMusiso students denied permission to register for exams