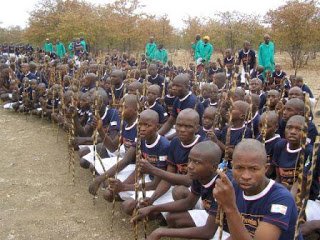 Zimbabwe’s fledgling voluntary male circumcision programme is being held back by misconceptions and rigid cultural traditions in pre-dominantly non-circumcising communities, the National AIDS Council (NAC) has said.
The voluntary male circumcision programme was launched in 2009 as part of efforts to fight the HIV/AIDS pandemic.
The programme was boosted early this year when government injected US$100 million in the accelerated operational plan 2014-2018 to get 80 percent of all males circumcised by 2018.
However, the ambitious target may prove unattainable due to misplace notions among many people.

Just before circumcision in Chikombedzi

“The targets that have been set are quite reasonable but challenges are being encountered in the country’s traditionally non-circumcising communities that, unfortunately, form the majority of the country,” said NAC Masvingo Provincial Coordinator, Evos Makoni.
“We encounter people who resist circumcision on the basis that it is a Shangani custom rite which has no place in their own communities. Others reject it for fear of pain but we have always made it clear that the process is relatively pain-free,” said Makoni.
In communities that practice circumcision as a tradition, said Makoni, it is easier to convince people to embrace the government  initiated programme.
“We dont have problems in such places and we work closely with traditional chiefs. In most cases, we send teams to do the surgical process then we leave them to do the rest of the rite process,” he added.
Communities that practice cultural circumcision in Zimbabwe include the Shangani in the Lowveld and the Remba in some parts of Gutu and Mberengwa.health
Share
Facebook
Twitter
Pinterest
WhatsApp
Previous articleTsvangirai on 2018 voter registration campaign
Next articlePoisoned garbage kills livestock in Zaka