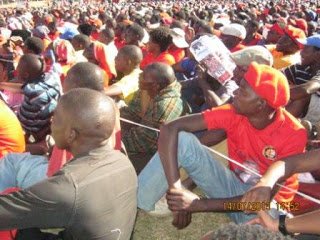 The Tsvangirai led Movement for Democratic Change (MDC-T) has started its a campaign aimed at mobilising the people especially the youths to go and register as voters for the upcoming 2018 harmonised elections.
Speaking at the workshop organised for the Masvingo provincial party leadership last week at the party’s provincial office, Tsvangirai said that people should start registering as voters as soon as possible and avoid commotion towards polls.
“Let’s go and mobilise our people so that they can register as voters especially the youths. We need to launch a massive voter education so that we can remove ZANU PF from power”, said Tsvangirai.
Tsvangirai added that the party’s leadership should make sure that the people in their areas are well versed with all the electoral processes.

Most MDC-T supporters who attended rallies in 2013 were not registered voters
“We do not want a situation where people are turned away because their names don’t appear at certain polling stations. This is a trick used by ZANU PF to try and discourage people from voting.
“ZANU PF has a tendency of putting more polling stations in their strongholds and in our strongholds they put few and dispersed polling stations”, said Tsvangirai.
Tsvangirai bemoaned the shocking number of assisted voters in a country which is at 96% literacy rate.
“What is shocking is the number of assisted voters who are said not to be able to write in a country with higher levels of literacy. We should not be intimidated because your vote is your secret. I plead with you to encourage all our youths to get registered and vote -that way Zanu PF will find it difficult to steal our vote”, added Tsvangirai.politics
Share
Facebook
Twitter
Pinterest
WhatsApp
Previous articleBere High through to Pinda Musmart NASH provincials
Next articleCultural barriers hamper circumcision drive : NAC