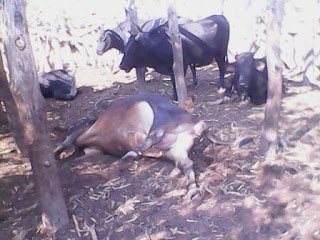 …suspected blackleg disease strikes the district
By Itai Muzondo
Zaka – In a suspected case of felony, Zaka villagers were left astonished after livestock including cows, goats and birds died after eating garbage disposed from Roman Catholic run St Anthony Mission recently.
Commenting on the shocking incident where unspecified number of cattle, six goats and several birds died, St Anthony  School Development Committee Chairperson, Addison Makovere said he was aware of the sad development but was still looking for detailed information on the actual cause of the deaths.
“Several goats, cattle and even birds died. I am not yet informed of major developments which led to the deaths of the livestock in question currently,” said Makovere.
Zaka Central Member of Parliament (MP) Paradzai Chakona disclosed that cyanide is suspected to have caused the deaths of the domestic animals.
“According to initial investigations, cyanide is suspected to have caused the deaths. The matter has however been reported to the police and we are awaiting for their response,” said Chakona.
Masvingo Acting police spokesperson, Assistant Inspector Nkululeko Nduna was neither available on line nor at his Masvingo Central Police Station Offices for comment by time of publication.

Dead cattle at St Antony Mission
An inside source at the St Antony  who preferred to remain anonymous, however, disclosed that the poisoning was conducted by the  staff  from the institution’s kitchen department in a bid to get rid of dogs and cats that roam around their work place  disturbing them.
“Workers from St Anthony high school poisoned the garbage in a bid to kill dogs and cats they said disturbed them when conducting their duties,” said the source.
Musiso village, Dzenga village, Gono village and Chigudu village are notably the most affected villages since they have been bringing in more reports of affected livestock.
Meanwhile, Masvingo  provincial veterinary  officer Dr Dzimwasha said suspected cases of blackleg have been reported in Mushavanhu Village, Bare Village and other surrounding villages near Jerera Growth Point in Zaka.
“Suspected cases of blackleg have been reported in several villages around Jerera Growth Point and we are definitely going to work swiftly towards rectifying the problem,” said Dzimwasha.local
Share
Facebook
Twitter
Pinterest
WhatsApp
Previous articleCultural barriers hamper circumcision drive : NAC
Next articleGovernment fails to compensate Tokwe-Mkosi flood victims