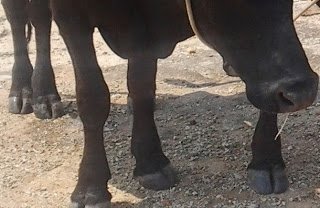 By Upenyu Silent Chaota/ ItaiMuzondo
Masvingo province has been hit by a foot and mouth disease outbreak, government officials have confirmed.
The development has come as a major setback to beef producers and thousands of cattle farmers in Masvingo.
Dr Richard Maunganidze of the Masvingo Veterinary services has however expressed that they are doing all in their capacity to curb the outbreak.
“It is true that cases of foot and mouth have been recorded in the province. We however want to assure famers that we are doing all in our capacity to curb the outbreak as vaccinations to prevent the spread of the deadly disease has since started in all districts around the province”, said Maunganidze.
Dr Maunganiudze further urged farmers to report any sign of the disease to the nearest veterinary office to avoid further spreading of the disease.
“On this note, I would like to urge all famers to report any symptoms of the disease to the nearest veterinary office so as to control it before further spread”, added Maunganidze.
The Chairman of the Beef Producers Association in Masvingo, Mr Robert Makado said the outbreak has greatly affected the beef producers because they can no longer transport their cattle from one point to another.
“In the business of producing and supplying beef, the is a lot of movement of cattle from one point to another or even from province to province but now it’s difficult to move cattle because of this disease outbreak”, he said.
“The Veterinary services have issued a quarantine order against the movement of cattle and if possible the move will undergo some serious vetting and testing which has made the transportation process to take longer than necessary”, he added.
Makado also said that the sales being made by the beef producers have since dropped and if this disease is not treated in time, farmers will not have enough finances to support themselves.
“As a result of this outbreak, the farmers have faced a great challenge in selling their cattle because for them to do that they need to transport their cattle to the abattoir, a move prohibited for the time being by the Veterinary services”, he said.
“We have reports from farmers who say that they cannot afford to cater for their day to day needs because they are not selling their cattle for money”, he added.

The treasurer of the Zimbabwe Commercial Farmers Union (ZCFU), Mr Henry Machingambi told Tell Zimbabwe that their organisation is trying hard to help the farmers who have their cattle affected by the disease.
“We are trying all we can to try and help the farmers who are affected by this outbreak…I also urge the farmers to co-operate with the authorities and do as they are told so as to avoid the spreading of this disease”, he said.
Share
Facebook
Twitter
Pinterest
WhatsApp
Previous articleBakers Inn donates bread in Masvingo
Next articleBiti, Mangoma attack Tsvangirai