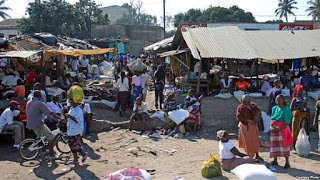 Davison Marenga
At least four people were injured, one of them seriously and goods worth hundreds of dollars destroyed when a row of flea market stalls collapsed in Mandava, Zvishavane on Fiday last week.
The police quickly reported at the accident scene but many people said they were surprised to see them in anti-riot gear as if anticipating a violent reaction from the vendors.
The injured were ferried to Zvishavane District Hospital in a Fire Brigade truck as the council ambulance took a very long time to arrive at the scene.
Three of the injured vendors were treated of minor bruises and scratches but one was admitted with serious head injuries.
Angry traders at the flea market who attributed the accident to structural faults of the market stalls said they had reported the structural problems to the council about three weeks back, but no action was taken, resulting in the collapse.
The vendors complained about poor service delivery by the council, which they accused of ignoring critical areas like public safety, clean water and the sewer system.
“Kanzuru iyi marara chaiwo, chavanoda kutora mari dzedu chete pasina kana chavanoita, iye zvino mvura inouya yakasviba, sewage pose pose and now flea market yawa asi rent vanotora every month” (This council is useless, they are just concerned with collecting rentals and not delivering),” said one stall owner.
“They are good for nothing, all they do is just sitting in their offices pretending as if they are working for the residents of Zvishavane yet they are doing nothing. They let everything go to the ground like this. They are just concerned about themselves not us,” said another trader.
Representatives of the vendors were locked in a closed door meeting with the council officials where they were reportedly promised that new and stronger stalls will be built for the affected people.
The town engineer, Lameck Gozho, was not seen on the accident scene in the immediate aftermath of the disaster, with some people saying it was characteristic of the council leaders to isolate themselves from what happens on the ground.
Efforts to get comment from council officials were fruitless by the time of going to print.news

He who said it can not be done must not disturb the one doing it!
Share
Facebook
Twitter
Pinterest
WhatsApp
Previous articleI was not assaulted by Mnangagwa allies – Ndaarombe
Next articleJaboon car ‘hijacked at gun point’