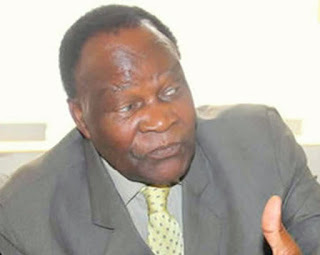 Minister of State for Liaising on Psychomotor Activities in Education Josaya Dunira Hungwe stunned Zanu PF Masvingo Provincial Coordinating Committee (PCC) when he urged the party provincial leadership to reduce their speed in taking decisions especially when it comes to expelling members suspected to be working with the former Vice President Joice Mujuru.

Sources who attended the PCC meeting at the party provincial office recently told this publication that Hungwe who is strongly believed to be Vice President Emmerson Mnangagwa’s strong man in Masvingo said the continuous purging of party members only worked to campaign for Mujuru.
TellZim News was informed that there was near drama when Hungwe blocked the provincial commissar Jeppy Jaboon from showing a ‘short Mujuru video aimed at exposing some party members who were supping with Mujuru’.
“Jaboon tried to show a video but Hungwe who was chairing the meeting would have none of it – Hungwe said he was fed up with the Mujuru story. Hungwe said let’s focus on building the party rather than concentrating on what people are doing at People First.
“Hungwe fumed and said Masvingo needed to reduce speed in taking decisions. He said it was Masvingo which was at the forefront in expelling its members and yet other provinces were taking time before making political decisions,” said the source.
Hungwe however, told TellZim News that he was not interested in viewing the video brought by Jaboon because it was not on the agenda.
Hungwe said he was a no-nonsense man who could not allow a meeting to be sidetracked while he was chairing.
“Yes I stopped him (Jaboon) because that was not part of our agenda. We had gathered to discuss the 21st February movement not to hear about Mujuru. I don’t allow anyone to bring their items for discussion when the agenda clearly shows us what to discuss….no I don’t allow that, they can do that in my absence.
“I don’t even know what was in that video and it was unacceptable to smuggle items for discussion … we want the 21st movement celebrations to be the best and that’s what we are concentrating on at the moment,” said Hungwe.
Hungwe was standing in for Minister for Masvingo Provincial Affairs Shuvai Mahofa who was not well.
However, Jaboon professed ignorance of the whole issue.
“I don’t know what you are talking about,” Jaboon said without further explanation.
Share
Facebook
Twitter
Pinterest
WhatsApp
Previous articleMDC-T on Fire
Next articleDokora introduces new education structures