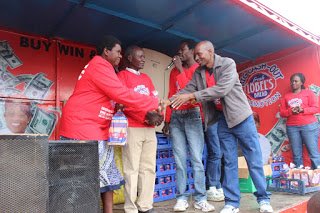 Mucheke woman wins $500 . . .
over 30 win instant cash prizes
TellZim Reporter
She can’t really remember what she was doing when the phone rang. But Resita Chabaya is sure of what she did when she answered the call. She jumped. Belief. Disbelief. Apprehension. And then this overwhelming feeling of gratitude.
For she had bought her Lobels bread and enjoyed it, a true confectionary delight. Yet on top of all that, she had won a whopping $500!
Chabaya, from Runyararo West high-density suburb, became the first person to win the Lobels Big-Cash Out grand draw in Masvingo in a draw conducted at Mucheke Bus Terminus last Saturday.
An elated Chabaya was at a loss for words and could not hold back tears of joy as she collected her prize the following day at Sisk Business Centre, where Lobels was continuing with the promotion.
“I cannot believe it; I thought I was dreaming when they (Lobels staff) phoned me yesterday informing me that I had won the Big-Cash Out draw. I bought about 12 loaves and entered the competition but had no hopes of winning. Now I am convinced that Lobels is the real bread and every customer has equal chances of winning,” said Chabaya.
Other lucky winners also walked away with various cash prizes ranging from $5 to $150 as well as bread. More than 30 residents from Mucheke and Rujeko suburbs went back home richer, thanks to Lobels Big-Cash Out instant promotion, which was meant for the customers who bought their bread during the draw.
And Lobels is not done with its loyal customers yet.
Lobels Masvingo Area Manager Michael Tsukirana said the promotion would run until end of June and urged their customers to enter into the competition and stand a chance to win up to $500 every weekend.
“This is our way of thanking customers for buying our bread. The promotion will run until end of June and we will be conducting draws every weekend. Our customers have a good reason to keep buying Lobels bread because they can never go wrong with the most trusted brand in the baking industry. Our bread has an original taste,” said Tsukirana.
Taurai Kamba, who won $100, was on cloud nine, and urged fellow residents to buy Lobels bread, where they have equal chances of winning.
“I was not expecting it; I am really excited. I enjoy eating Lobels bread because it has an original taste. I had no money in my pocket but I am now $100 richer, thanks to Lobels. I want to urge customers to buy Lobels bread,” said Kamba.news

He who said it can not be done must not disturb the one doing it!
Share
Facebook
Twitter
Pinterest
WhatsApp
Previous articleAsst DA turns food distribution into Zanu-PF rally
Next articleChiredzi tops in veld fires: EMA