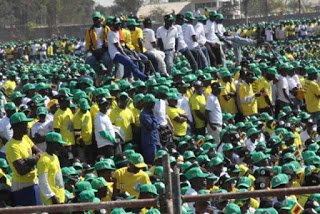 Staff reporter
Assistant District Administrator for Zaka Gift Machukele is alleged to have turned a social welfare food aid distribution event into a rally, campaigning for President Robert Mugabe at Vanyoro Community Hall in Ward 23.
Machukele, who had come to monitor the distribution following complaints by local MPs that social welfare officers were corruptly distributing the food, allegedly ended up chanting Pamberi naVaMugabe in front of the people.
Machukele had also come to announce the introduction of the food-for-work programme for able-bodied people who do not qualify for the social welfare food aid.
Machukele could not be reached for comment by the time of going to print.
Afterwards, members of the public told this publication they were offended by the politicisation of food aid.
They accused him of trying to use non-political platforms to campaign for Zanu-PF and giving first priority in the food distribution process to Zanu-PF sympathisers.
“The social welfare food aid is for everyone and there must be no slogans during distribution of food. As a civil servant, the DA is not supposed to dabble in politics,” said a villager from Vanyoro.
Villagers also said whenever given a platform to speak, Machukele begins with a ruling party slogan, Pamberi naVaMugabe, Pamberi nekubatana.
It was announced that the public works food-for-work programme will benefit those who were willing to work on public projects for 15 days for a bag of maize.
Local ward councillors were tasked to compile the names of eligible people who were benefiting neither from CARE cash vouchers nor the social welfare aid programme.news

He who said it can not be done must not disturb the one doing it!
Share
Facebook
Twitter
Pinterest
WhatsApp
Previous articleJaboon car ‘hijacked at gun point’
Next articleLobels Big-Cash Out fever grips Masvingo