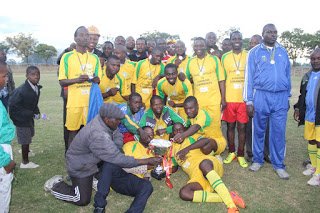 Lloyd Shunje
Reformed Church in Zimbabwe’s (RCZ) Masvingo congregation were crowned champions for this year’s edition of Nyaningwe RCZ Varume Bhora tournament after dismissing former champions Mbizo by 5-4 on penalty shootouts in Mucheke stadium over the weekend.
For being the winners of this year’s edition the Masvingo team, which featured former Dynamos player George Magariro, walked away with a trophy, gold medals, jerseys and US$3 000 courtesy of the Mapuvire family of the Nyaningwe Supermarkets.
The hosts also had veteran player and former Masvingo United back, Godfrey Dondo.
Second placed Mbizo congregation of Kwekwe, who are former champions themselves, walked away with silver medals, a jersey kit and US$1500.
Seke congregation won bronze medals and US$600 whilst Rodhene was given US$600 prize money for coming fourth.
Masvingo had their goal minder, Takunda Chipezeze, to thank after he stopped Mbizo’s sixth penalty after the game had ended with a goalless draw.
Mbizo reached the finals after dismissing newcomers Rodhene by a goal to nil through a penalty by Leeroy Madzivire after tournament’s top goal scorer Joseph Mashayamombe was fouled in the box.
Masvingo sailed through to the finals after knocking out Seke by a controversial penalty which saw the game being stopped with Seke denying the hand ball, even threatening to boycott the game before organisers later intervened.
On individual prizes Masvingo congregation’s Tawanda Muvengwa, who also plays for Masvingo City in the Eastern Region Division One, won the man of the match and walked away with US$100.
Senga congregation got US$100 for being the most disciplined team but Gunners Munzararikwa of Mbizo was voted the best over 40 years, also getting US$100.
Speaking before the final, guest speaker Felix Munyaradzi of the Delatifin Civil Engineering Company who was represented by the Human Resource Manager, Amos Vhori made big pledges to the RCZ.
“As Delatifin we would like to show our appreciation to the church by seeing to the roads that will link the new campus and providing bricks that will be used to construct the student residential area of the campus free of charge.
“In addition we will also take the winning coach for a one week holiday for two in Harare living in Jameson Hotel, with a car being provided to tour Harare at the expense of Delatifin Civil Engineering Company,” added Vhori.news