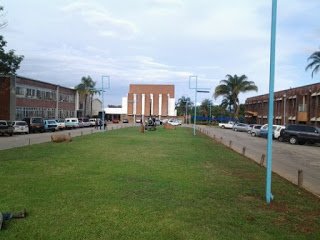 City of Masvingo’s wage
bill is likely to rise after the municipality’s police reportedly applied to be
transformed into a department with its own annual budget, TellZim can report.

The city currently
sustains a roughly $10 million wage bill for its 600 employees, and currently,
the municipal police operate as a unit housed in the office of the chamber
secretary.

Sources said some
council managers as well as councillors were friendly to the suggestions, and a
resolution to that effect was likely to be made should there be consensus.

The sources said there
had been simmering grievances in the police service that officers were poorly-remunerated
due to what they feel is an unfair grading system.

The local authority’s
workforce is graded from 1 to 17; with grade 1 – which comprises such workers
as lawn mower drivers and litter pickers – being the lowest grade, and 17 –
which is the town clerk’s grade, being the highest.

“It’s a gross injustice
to rank municipal police officers who are trained, who cannot be easily
substituted and whose work is critical, below mere drivers with class 4
driver’s licenses. The police’s worth has been underestimated for far too long
and it’s about time that is corrected,” said a source with knowledge of the
goings-on.

The sources said should
the proposal be granted, the lowest-ranked municipal police officer will be
moved to grade 8.

The local authority
recently recruited an additional 20 municipal police, with 10 more likely to be
added to the list to give the unit a staff complement of 80 officers.

However, Acting Town
Clerk Edward Mukaratirwa said the proposal was rather for municipal police to
be moved to the office of the Town Clerk.

“They can’t be a
fully-fledged department as such. The proposal is that the unit be transferred
from the office of the chamber secretary to the office of the town clerk and
management is currently seized with the issue,” said Mukaratirwa.

He acknowledged that the
move would mean an increase in salaries for the municipal police officers.

“It would also cut
bureaucracy as all their issues will be directed straight to the town clerk,”
said Mukaratirwa.