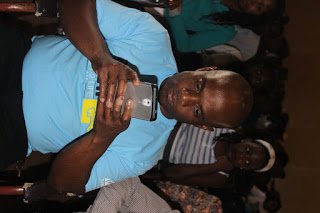 May 3 was World Press Freedom Day. It was an important day for journalists and media practitioners around the world.  But for those of us who live in a country where the laws are still draconian and legislators seem to slow realignment of media laws to the new constitution… it was an UBER IMPORTANT DAY!
Journalists in Masvingo joined the rest of the nation and the world at large in celebrating the 2016 World Press Freedom Day under the global theme “Access to information and fundamental freedoms – This is your right” and a national focus on “Media Sustainability in the Digital Age in Zimbabwe”.
During the press conference which was the main event of the day in Harare, Christopher Mushohwe, Minister of Information, Media and Broadcasting Services stated that his Ministry “remains seized with the exercise to revisit the existing media laws and plug the gaps and inadequacies that might have a bearing on the creation of a conducive environment for the development and growth of the information and media industry in Zimbabwe”.
The Minister further added that “All stakeholders should be rest assured that the Ministry will move with speed to address any anomalies arising from our media laws that offend our democratic dispensation and the new Constitution”.
Journalists and media activists however argued that government has taken too long to scrap repressive media laws and realign media laws to the new constitution.
“Developments in scraping some draconian laws such as criminal defamation had nothing to do with government. It was forced by civil society organizations to abolish that law and now Zimbabwe stands among other countries that have done away with the repressive law,” said Media Institute for Southern Africa (MISA) Zimbabwe director Nhlanhla Ngwenya.
Added Ngwenya, “The civil society can always push for government to act swiftly in realigning draconian media laws to the new constitution. It is just that the civil society doesn’t have authority to realign the laws or that would have been finished already. Fortunately, the power of civil society is in playing a watchdog role, making noise so that the responsible authorities take action.”
Access to Information and Protection of Privacy Act (AIPPA), Public Order and Security Act (POSA) and Broadcasting Services Act (BSA) are among the laws the journalists want simply abolished or realigned to the new constitution to ensure freedom of the press.
In a press statement, the Voluntary Media Council of Zimbabwe (VMCZ) also wrote of the urgent need to realign media laws to the new constitution.
“Whilst we celebrate this milestone (scrapping of the criminal defamation), there is a need to re-align media laws and ensure that the repressive media laws, which include among others  AIPPA and BSA, are in line with the new constitution. VMCZ urges the government to urgently repeal repressive media laws and amend those laws that are ultra-vires the Constitution of the Republic of Zimbabwe,” the statement read.
“We also call on the Zimbabwean government to urgently licence community radio stations in order to allow communities to freely express themselves on issues affecting their development and for the communities to enjoy their right to access information and enjoy freedom of expression as enshrined in the country’s constitution…government should put in place a framework that will see the transformation of the Zimbabwe Broadcasting Corporation (ZBC) into a truly public broadcaster,” further reads the statement.
“Journalists aren’t opposed to any law that safeguards social media. The media fraternity is however under threat given that the cyber laws under draft might come into effect, further thwarting press freedom than controlling cyber-crime,” argued Herbert Chikosi, Masvingo-based journalist.
Meanwhile, in a Freedom House report entitled Freedom of the Press 2016, Zimbabwe also appears on the list of countries that have unfavorable conditions for the press.
“Among the countries that suffered the largest declines in 2015 were Bangladesh, Turkey, Burundi, France, Serbia, Yemen, Egypt, Macedonia, and Zimbabwe.
“Press freedom declined to its lowest point…as political, criminal, and terrorist forces sought to co-opt or silence the media in their broader struggle for power,” the report notes.
The report further notes that only 13 percent of the world’s population enjoys a free press and in the societies that constitute the 13 percent, coverage of political news is robust, the safety of journalists is guaranteed, state interference in media affairs is minimal, and the press is not subject to onerous legal or economic pressures.news