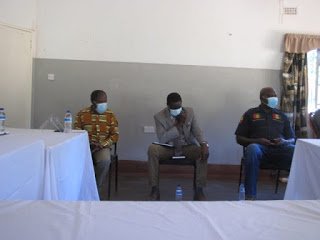 Speaking
during the celebrations, Misa Trustee, Cris Chinaka applauded the local media
stakeholders for changing the character of media which has always been regarded
to as urban centric and not inclusive.

“Media
has run away from being an urban centric industry but an industry that serves
everyone in the community. The community is represented by the public and the
public constitute both people from the rural and the urban,” said Chinaka.

Chinaka
also urged the media fraternity to disseminate information that benefits
everyone in the communities which they serve and is of public good.

“The
information that the media collects, report and edit should be of public
benefit and be understood by the public in order for them to be able defend the
media space.

“The
media space can only be recognized if the public understands and benefit from
the information which they are given by the media,” said Chinaka.

Chiredzi
East legislator who is also a member of parliamentary portfolio committee on
Information Media and Broadcasting Services, Denford Masiya gave a thumbs up to
Misa for taking the media to all angles of communities and for reminding
everyone that the media is for the public.

“I
support Misa for bringing the media fraternity to rural areas and for also
reminding everyone that the media is for the public,” said Masiya.

This
year’s WPFD celebrations which are being held 30 years after the Windhoek
declaration was held under the theme ‘Information as a public good’.

“Over
the past years we have been celebrating this day in town but this year we chose
to come to Nemanwa so that the people here get to interact with media
stakeholders. Next year we hope to celebrate this day in Zaka as we continue to
try and bridge the information gap between the rural and urban folk,” said
Kuzipa.

The
day was capped with an intriguing soccer match between Masvingo Journos
Football Club (fc) and Nemanwa FC.

Although
Masvingo Journos lost 2-0, it was the first half solitary strike of team
captain and marksman George Maponga which was the major highlight after he hit
the back of the net but was ruled out for offside from a tight angle.