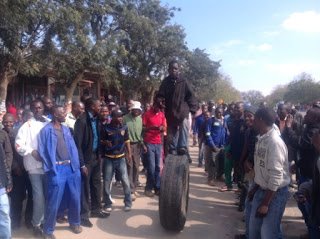 An intriguing Mozambican street kid whose tyre trotting skills brought business to a halt in Masvingo recently has said he wishes to hold a show for President Robert Mugabe.
Speaking to Tell Zimbabwe, Kupa Zeka said he does not know his age said he wishes to perform before Mugabe.
“My big wish with my talent is to hold a show for the President of Zimbabwe, Robert Mugabe. I really enjoy my business and wish to reach far with it,” said Zeka, in his poor Shona accent.
Zeka’s aide who refused to be named said Zeka is of Mozambican nationality and is an orphan who relies on his street shows for a living.
“Zeka is an orphan and a Mozambican national. He only visited Zimbabwe to do his street show business for which he earns a living from well wishers as they always shower him with money during performances in the streets,” said the aide.

Kupa Zeka doing what he knows best in the street of Masvingo  while hundreds gather to see him performing recently
The aide added that Zeka learnt his skills as he grew up, firstly by trotting on a pestle (duri) until his abilities grew to trotting on a tyre with astonishing balance and entertaining skill.
“As Zeka grew, he first learnt his tides by riding on a pestle for which he surprisingly started trotting on a tyre with astonishing balance and entertaining skill,” added the aide.
Meanwhile, Zeka has been to Mutare, Harare and currently in Masvingo. He said his next stop will be Bulawayo.local
Share
Facebook
Twitter
Pinterest
WhatsApp
Previous articleWomen group manufactures re-usable menstrual pads
Next articleChiredzi vendors blast council over uncollected garbage