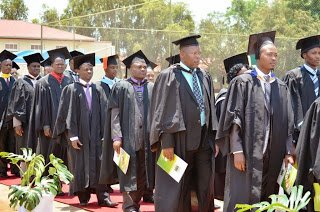 By Itai Muzondo /Moses Ziyambi
President Robert Mugabe hailed Great Zimbabwe University (GZU) for naming its law school after the gallant freedom fighter and nationalist Herbert Chitepo.
Mugabe said this when he officially opened the Herbert Chitepo Law School where he hastened to say he would have named the law school the same name if he had given the chance to do so.
“I do accept and appreciate the effort shown to our departed hero by naming this magnificent school after him, I would have done the same. We had planned to establish Herbert Chitepo School of Ideology as a party (Zanu PF) but we were limited by financial constraints. We have been talking about this school of ideology since 1980 but nothing tangible came out as was done by Professor Rungano Zvobgo in a short period.

“Other than burying Chitepo at the National Heroes Acre, the GZU’s Herbert Chitepo Law School is the first serious honour given the pioneer black lawyer who initiated the armed struggle from exile in Zambia where he was eventually killed in a car bomb.
“I want to congratulate Vice-Chancellor Prof (Rungano) Zvobgo on your very enterprising, magnificent, indomitable energy and trust. Thank you also for using magnificent technology to produce buildings of this nature,” said President Mugabe.
Chitepo’s last born son, Khule Chitepo said his family was humbled by the befitting honour of his late father.
“As Chitepo family, we are truly humble by this honour. My father was a ferocious reader and as a he result he left 155 text books which we decided to donate to this law school library,” Chitepo said.
Meanwhile There was pomp and fanfare yesterday at Great Zimbabwe University (GZU)’s Main Campus during the institution’s eighth graduation ceremony which saw a record 1063 graduates being conferred with various degrees.
Speaking at the event, GZU Vice-Chancellor Professor Rungano Zvobgo, highlighted the progress that the university has made in providing quality education and improving its standing among universities nationally and internationally.
“Great Zimbabwe University has come out of its slumber and made its mark on the educational terrain nationally, regionally and internationally,” said Professor Zvobgo, pointing out that the university’s goal was to produce a graduate who relates to his culture.
“We have managed to align the curricula in line with culture and heritage,” Professor Zvobgo added.
He also noted the growing stature of GZU in foreign countries as evidenced by the presence of foreign students, saying internationalisation was an image builder and a global trend.
“Internationalisation of higher education is a world-wide trend that falls in line with the attainment of Millennium Development Goals,” he said
GZU has managed to attract a significant number of foreign students from the SADC region in the past year, with numbers rising from zero two years ago to 158 currently.
“The population increase has been adequately catered for by infrastructural development. We now boast a total of five campuses that are supported by two main libraries,” said Professor Zvobgo, who added that the multi-campus approach adopted by the university was a well-planned system.
The event was also punctuated by the official opening of the Herbert Chitepo Law School by the president, who hailed GZU for striving to improve education.
Entertainment at the event was provided by, among others, the GZU Marimba Band, GZU Jazz Band, GZU Museve Band and another brass band from the army.Local
Share
Facebook
Twitter
Pinterest
WhatsApp
Previous articlePolitical parties taking Zimbabweans for granted
Next articleCrocodiles terrorise Mazare community