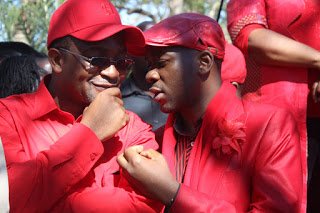 
…says he will issue a statement when time comes

The proclamation of the congress date by the MDC Alliance has drawn interest from various corners across the globe with speculations pitting president Nelson Chamisa and secretary general Douglas Mwonzora to race for the top job.
Mwonzora’s name has been thrown into the race with social media being awash with photoshoped pictures of campaign materials for the reserved secretary general.
WhatsApp groups have been dominated by the two camps fighting to boost morale for the watershed election which will be a make or break for Mwonzora whose chances of dislodging Chamisa are narrow.
If Mwonzora chooses to contest Chamisa and end up losing the race, he will be reduced to a mere card carrying member.
TellZim News contacted Mwonzora to find out where he stands regarding the congress and he said he would rather keep his next steps to himself and will make an announcement at the opportune time.
“I have seen a lot of photoshops purporting to support my candidature for the presidency. I have not said I am running for the presidency so people should not listen to what is being said on social media.
“It is within my constitutional rights to run for any post but right now I would rather reserve my next steps to myself. I will be making a statement when the time comes so people should calm their horses,” said Mwonzora.
The MDC Alliance national congress will be held from 24 to 26 May 2019.  The branch, ward, district and provincial congresses will be held between March and April.
MDC Alliance spokesperson Jacob Mafume said the congress date has been set but people should calm down and not create divisions in the party.
“It is only the congress date which has been set but we will not tolerate anyone who will go about fomenting divisions in the party. We want everyone to be united and approach the congress as a united force.
“Congress starts at ward, district and provincial levels before we do national. As for the presidency, candidates will be nominated by provinces so no one has to start jostling for positions,” said Mafume.
National organising secretary Amos Chibaya is on record saying his boss will go uncontested at congress and banned aspiring candidates from campaigning ahead of congress.