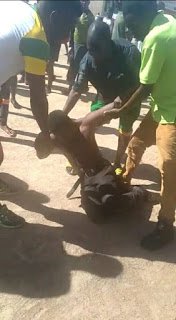 A
Neshuro barber was recently beaten to a pulp after he was caught red handed in
bed with a taxi driver’s wife.

Emmanuel
Chipepetseki popularly known as Chipaz was on Monday, March 15, bashed and
paraded around the busy Neshuro Growth Point and had to fake death to save his
life.

Chipaz
is said to have been engaged in an adulterous affair with one Andrew’s wife who
resides close to the growth point.

On the
fateful day, Andrew, who sometimes pirates with his taxi to Beitbridge, called
his wife informing her that he was not coming back home as he had secured
business to the border town.

As the
adage goes, when the cat is not around mice play, Andrew’s wife made arrangements
with Chipaz to come at her place and spend the night.

As fate
would have it, Andrew cancelled his trip in the eleventh hour and showed up at
his place in the middle of the night unannounced.

Andrew
caught his wife and Chipaz in their bedroom groping for trout in a peculiar
river.

Chipaz
bolted out of the house and disappeared into the dark of the night but Andrew
had already identified him.

In the
morning, Andrew gathered his friends and began a manhunt for Chipaz who was
found relaxed at his house near Neshuro Growth Point.

Andrew
and his friends bundled Chipaz into their car and took him to the growth point
where they rained fists on him.

TellZim
News reporter witnessed the whole drama unfold as Andrew and his friends
dragged Chipaz around the growth point humiliating him.

To save
himself, Chipaz pulled a death act prompting his attackers to retreat.
Realising that there was a window to escape, Chipaz bolted away to safety.