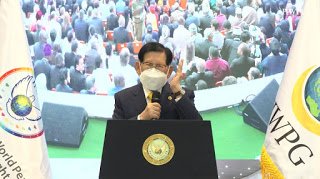 On March 14, over 1,200 people in 132
countries from all sectors of the society participated in the webinar to
celebrate the 5th Annual Commemoration of the Declaration of Peace and
Cessation of War (DPCW).

The DPCW reaffirms the peace-based
principles contained in various international law documents, such as the UN Charter
and the Universal Declaration of Human Rights. It includes principles of
peace building such as the prohibition of the use of force, development of
friendly relations, and peaceful dispute settlement. It also emphasizes
international cooperation based on interfaith dialogue and civic participation
to create a culture of peace.

Since the DPCW’s proclamation on March
14th, 2016, the DPCW-based peace building model went on to receive government
recognition and support for inter-religious dialogue, peace education, youth
and women’s peace activities.

HWPL’s founder, Chairman Man Hee Lee
shared that the desire to achieve peace was not dampened by the COVID-19
pandemic. “The work to submit the DPCW is underway. However, the COVID-19
pandemic affected the entire global community, which led to a brief stop in the
process but our focus, and collective determination for building a world of
peace stays strong. I am confident no one could reject such a cause,” said Lee.

As a member of the International Law
Peace Committee (ILPC) that drafted the DPCW, Professor Ciaran Burke explained
the background of how the DPCW was founded on “the conviction that judicial and
other dispute resolution measure can replace the role of war with the rule of
law.”

He also stressed the kernel of the DPCW
“is the envisioned effect of the DPCW is cumulative to scale up the moral and
political responsibility of world leaders by crystallizing the legal
obligations of their government thereby bridging the gap between law and
politics.”

In
2019, the International Peace Youth Group (IPYG), an affiliate of HWPL, began
the Peace Letter Campaign as an effort to compel national leaders to advocate
for the adoption of the DPCW by the UN General Assembly in the form of a
binding resolution.

Speaking
on behalf of the youth advocates, Mr. Reuben Sapetulu, Deputy Secretary Agent
for the United Nations Youth Association of Zambia (YUNA Zambia), said, “I
participated in the delivery of 3,000 peace letters to the minister of justice
in Zambia for the DPCW proposal. My commitment is simply because I agree that
the DPCW is an effective way to bring a cessation of war and world peace.” Up
to date, IPYG have sent around 200,000 letters to the heads of state from all
UN member states through the Peace Letter Campaign.

HWPL is a peace NGO in Special
Consultative Status with the UN ECOSOC and associated with UN DGC. To cease all
wars and create a peaceful world as a legacy for future generations, HWPL has
been carrying out three main peace initiatives – international law for peace,
interfaith dialogue meeting, and peace education.