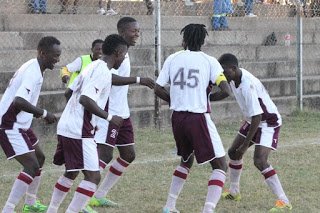 Exsto Makunzva
Shabanie football club is in a no nonsense mood this season as it continued to dominate the Zifa Central Region Division One League with a two-nil drabbing against Kwekwe Sables at Maglass Stadium over the weekend.
The win over the weekend saw Chinda Boys, as Shabani FC is popularly known by its legion of fans, remaining on top of the log table.
Kwekwe Sables started on high note exchanging clean passes and switching play from left to right but lost concentration in the dying minutes of the first half. It was in fact a tale of two halves as the hosts also dominated the second half and, it seems, lucky was on the Chinda Boys’ side as they managed to convert all the chances that came their way.
Shabani skipper Nixon Mpote fired home a cross from the right flank before Eria Phiri converted a penalty to seal Shabani’s victory. The penalty came after Maxwell Mpofu was hackled down in the 18-Area box.
Shabanie FC gaffer Tendai Chikuni was happy with the performance of his boys after 90 minutes.
“I am happy; the boys played well and we hope to maintain the winning formula,” said Chikuni.
Sables coach Kenneth Chembe also said he was happy with the performance of his boys despite loosing the match.
“The boys played very well since we are still trying combinations.This is a new team, it’s different from the one that was playing last year, so the boys showed character and we lost fighting,” said Chembe.sport